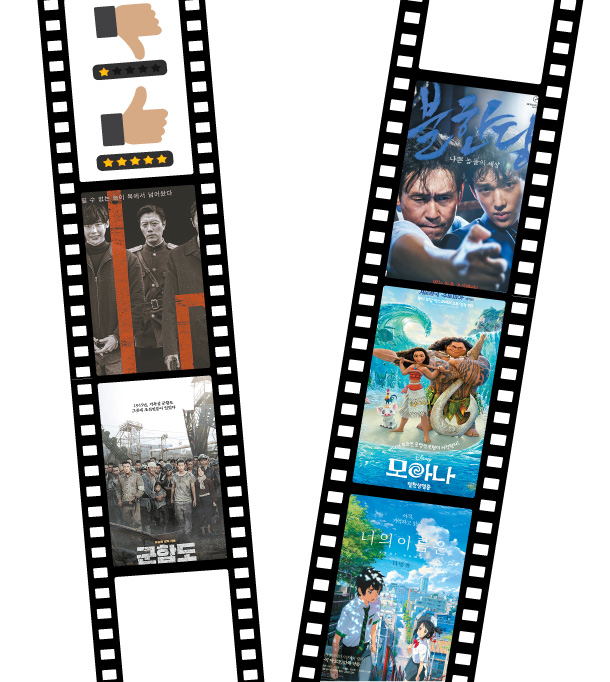 Over the past year, users have intentionally pushed down or raised the ratings of movies on Korea’s biggest portal site Naver. Some of the recent releases affected by Naver’s netizen evaluations include “V.I.P.,” “The Battleship Island,” “The Merciless,” “Moana” and “Your Name.” [CJ E&M, WARNER BROS. KOREA, THE WALT DISNEY COMPANY KOREA, MEGABOX PLUSM]

Walt Disney’s animated adventure “Moana,” released in January, was a huge hit in the United States. Based on the culture and mythology of the Polynesian people, “Moana” received favorable reviews from both critics and audiences for taking a different approach by diverging from the typical princess story where a prince charming character comes to save her from a life-threatening situation. But before it even landed in Korea, a group of people vehemently refused the movie because it was considered a box office threat to the Japanese animated film “Your Name” which was released a few days ahead of “Moana.”

Fervent fans of the Japanese film, directed by Makoto Shinkai, organized and gave “Moana” the lowest score on the rating system of Naver, Korea’s largest portal site, while giving the highest score to “Your Name.” The film eventually became the best-selling Japanese animation ever released in Korea, selling a total of 3.67 million tickets. “Moana” ended up selling 2.3 million admissions, a flop compared to previous releases from Disney like “Frozen” (2013) and “Zootopia” (2016) which sold 10.3 million tickets and 4.7 million tickets in Korea.

Similar problems have come up in the local film industry this year, leaving several movies that do not fit a certain group of people’s taste to be quickly pulled from theaters.

Most recently, crime drama “V.I.P.,” which opened at the top of the box office last month, eventually became a complete flop after the audience complained about the inappropriate depiction of women in the film.

The Warner Bros. release was one of the most highly anticipated movies in the second half of the year for its star-studded cast. But the film’s depiction of women who had been assaulted was criticized and audiences eventually took the issue online in a concerted effort to affect the film’s ratings on Naver.

Before it was released, nearly 600 Naver users gave the movie an average score of 8.27 out of 10. But after the film was unveiled, the score suddenly dropped to 6.40. Based on ratings from 11,800 Naver users, more than 70 percent of evaluators chose to give the film either the lowest score of one, or a perfect 10/10.

Director Ryoo Seung-wan’s period film “The Battleship Island,” released in July, and crime action “The Merciless,” released in May, were two other movies that clearly drew divided responses.

Similarly, “The Merciless” received an average 5.95 on Naver’s netizen evaluation, which many saw as a reaction to director Byun Sung-hyun’s sexually and politically inappropriate tweets, which created controversy soon after the film was released.

Internally, Naver sees the current netizen evaluation system as a problem, according to an employee of Naver who asked to remain anonymous.

“We’re keeping netizen evaluations because people can refer to ratings of movies that did not get a domestic release from those people who have watched them via different means,” the source said. “But we are aware that some users are abusing the system to manipulate a film’s average score.

“Some people have been found to have created multiple usernames under a single IP address. We’re currently discussing measures to fix the problem caused by these kinds of abusers,” the source continued.

Manipulating movie scores can be very problematic, as “Naver has become the most popular portal site for moviegoers to refer to when deciding what to watch in theaters,” according to film critic Kim Hyung-seok.

Kim believes Naver cannot easily get rid of the netizen evaluation system because Naver’s power comes from its large number of users and the vast databases that are created from them.

“The situation for Naver’s rating system is helpless, but there seems to be no alternative,” Kim said, suggesting that the portal service place film critics’ evaluations ahead of user evaluations, like most foreign rating systems such as Rotten Tomatoes do.

Film critic Yu Gi-na agreed that there is not a clear way to fix the current rating system.

“To prevent users from giving extreme scores on Naver’s rating system, Naver should separate ratings marked by those who actually watched the movies and those who did not,” Yu said. She admitted this may be difficult to achieve as there is currently no way to prove that a user had actually seen the film before they provide their feedback.

Both Kim and Yu noted that bad ratings often give filmmakers an excuse to pin their poor box office performance on extreme reactions from netizens.

“Whether the films [affected by online user ratings] would have sold more tickets were it not for the low scores given by a group of people remains questionable,” Kim said.

“As a nation with one of the highest annual movie attendances (tickets sold per person) in the world, Korean audiences tend to have their own standards when choosing to watch a movie in theaters.”