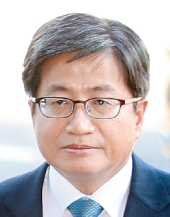 The National Assembly Thursday approved Kim Meong-su as the new chief justice of the Supreme Court, after the ruling party managed to secure crucial votes from the opposition.

Voting took place Thursday afternoon and 298 of the 299-member legislature attended. Of those, 160 voted for the nomination and 134 opposed. Three votes were counted as invalid and one abstained.

President Moon Jae-in nominated Kim, head of the Chuncheon District Court in Gangwon, as the new Supreme Court chief justice on Aug. 21. His fate, however, had been uncertain as the conservative opposition Liberty Korea Party and the Bareun Party opposed him.

They said Kim, who formerly led a group of liberal judges, could fuel the judiciary’s swing to the left. Until the end of his term in May 2022, Moon will appoint 10 more justices on the top court’s 14-member bench.

The ruling Democratic Party and its ally the Justice Party tried to persuade the People’s Party to back the nominee to secure the crucial votes needed to pass the nomination.

The Democratic Party occupies 121 seats and the Justice Party has six lawmakers in the 299-member legislature. The Liberty Korea Party has 107 and the Bareun Party has 20. The People’s Party has 40 lawmakers.

With the confirmation, the judiciary managed to avoid a leadership vacuum. The term of the current Supreme Court Chief Justice Yang Seung-tae ends on Sunday.

Kim issued a statement through the Supreme Court on Thursday and promised his best efforts to serve the people. “The judiciary is facing various challenges and hardships and I will do my best to resolve them wisely,” he said.

The Blue House on Thursday welcomed the passage of Kim’s nomination. “We express our appreciation to the legislature for confirming the nominee,” said Senior Presidential Press Secretary Yoon Young-chan. “We will respect the National Assembly and put more efforts into cooperative politics and communication.”

During his six-year term, Kim is expected to lead an ambitious judicial reform campaign.

He will likely end the long tradition of elite judges at the National Court Administration controlling administrative and appointment authority over the judiciary. Kim is expected to allow judges from diverse backgrounds to express their opinions in judicial administration.

Another challenge for Kim will be introducing an appeals court system, because the Supreme Court is swamped. Each Supreme Court judge handles about 3,000 cases a year.

Establishing a separate appeals court for low-profile cases was a project championed by the outgoing Chief Justice Yang, but never realized.

During the confirmation hearing, Kim said he wants to improve the appeals system and increase the number of Supreme Court justices. Many senior members of the judiciary, however, oppose the idea of putting more judges on the top court’s bench.