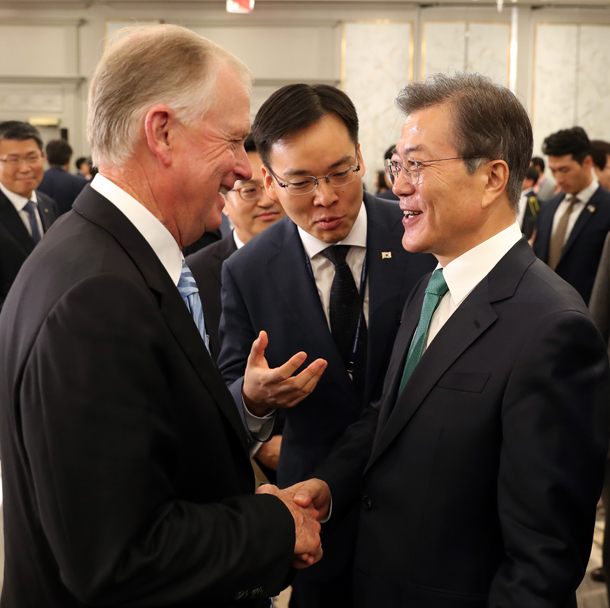 Ahead of his United Nations speech, President Moon Jae-in offered yet another olive branch to the North on Wednesday, again inviting the regime to the 2018 Winter Olympics Games in Pyeongchang, Gangwon.

“Tensions are high now but because of that, peace is all the more needed. If the two Koreas come together at this point in time, it will become a great opportunity to send a message of reconciliation and peace to the world,” Moon said at a gala to celebrate the Olympics Games. “I do not think it is impossible. So far, the two Koreas have had several experiences of coming together through sports.”

Moon is in New York for his debut at the UN General Assembly on Thursday, where he is scheduled to deliver a keynote speech in which he is expected to stress the need for more powerful sanctions on North Korea to end its nuclear and missile brinkmanship.

Following the speech, Moon is also scheduled to have a bilateral summit with U.S. President Donald Trump and a trilateral meeting with Trump and Japanese Prime Minister Shinzo Abe. Moon’s speech and summits are to take place just days after Trump threatened to “totally destroy North Korea” in his first address to the UN General Assembly.

At the gala event on Wednesday, Moon reminded the North that it previously took part in sporting events in the South, including two competitions this year alone. He said the South and the International Olympic Committee will work with patience to persuade the North to participate in the Winter Olympic Games, which are set to begin in February 2018.

Moon also met with International Olympic Committee President Thomas Bach and discussed the plan. He said the North’s participation will further ensure the safe hosting of the Games, although Seoul has prepared safety measures for the event.

Earlier in the day, Moon met with heads of leading U.S. think tanks, including Richard Haass, a former U.S. diplomat and currently the head of the Council on Foreign Relations, and discussed the North Korea issue.

He also urged American investors to look to Korea on Wednesday, assuring them that the economy is not at risk by North Korean provocations. Moon made a speech in a meeting with top U.S. businessmen and investors in his administration’s first overseas investor-relations event.

“Just as firm as the determination of the Korean Government is the market’s trust in the Korean economy, which has managed to steadily and consistently develop despite the confrontational situation with the North over the past 60 years,” Moon said. “Even after the recent nuclear test by the North, the Korean stock and foreign exchange markets have remained stable after temporary fluctuations.”

Moon noted that the Korean composite stock price index rose 2.3 percent even after the North’s sixth and most powerful nuclear test on Sept. 3, and said the fundamentals of the Korean economy are as strong as ever.

“I speak with confidence that this is a moment to invest in the Korean economy, which is making another leap forward,” Moon said, adding that his government’s vision for inter-Korean economic cooperation will also bring peace to the peninsula and the region.

In the speech, Moon also defended the Korea-U.S. free trade agreement (FTA), stressing that it is “crystal clear” that the pact is benefiting both countries. He noted that efforts were being made to discuss an amendment to the FTA, at the request of Washington. “Korea will engage in negotiations with sincerity,” he said, “but I hope the reciprocity of the FTA will be properly assessed.”

He added, “I am well aware of the United States’ concern, but the negotiations should be conducted in a composed manner along with an objective analysis of the results of the FTA.”