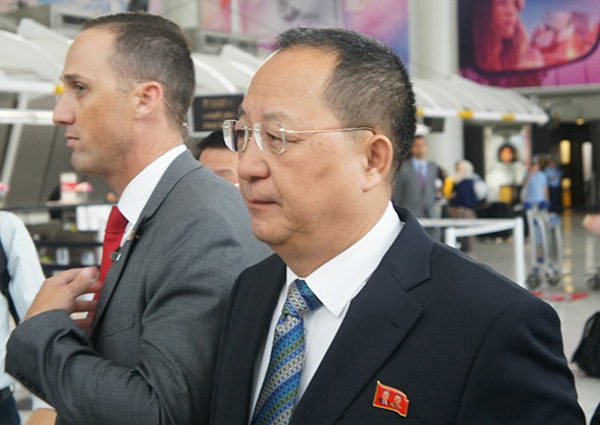 The South Korean government will give North Korea $8 million worth of aid through two international organizations under the UN, as President Moon Jae-in continues to distinguish between humanitarian assistance and political and military affairs in his dealings with the Kim Jong-un regime.

A specific timeline was not given. The Ministry of Unification said details of the plan, including when and how the donations will actually be carried out, will be decided "with consideration of South-North relations," without elaborating any further.

That could mean the aid might not arrive in North Korea this year, senior ministry officials said.

All humanitarian aid to the North was halted after the country carried out its fourth nuclear test in January 2016 under Moon's conservative predecessor, Park Geun-hye. Moon's left-leaning administration has championed a two-track approach to Pyongyang, which pressures the regime to scrap its nuclear weapons program while asking for dialogue and promoting cooperation.

Moon's confirmation of aid comes after a sixth nuclear test was carried out by Pyongyang on Sept. 3, and another intermediate-range ballistic missile launch on Sept. 15. The missile test came one day after Seoul first said it was considering the $8 million aid package, which the central government will pay for.

The decision was finalized Thursday after a vote in a Consultative Meeting on Promotion of Inter-Korean Exchange and Cooperation, a group under the Unification Ministry that’s chaired by the minister and includes 12 vice ministers and five members from the private sector.

Eight vice ministers and two private-sector members joined the vote. Approval from a majority of participants was needed for the motion to pass.

Of the $8 million, $3.5 million will go through the United Nations Children's Fund, also known as Unicef, to pay for vaccines, basic medical equipment and malnutrition treatment for North Korean children. Another $4.5 million will go through the UN's World Food Program to purchase nutrition-rich food supplies for North Korean hospitals and day care facilities, targeted at mothers and infants.

The Unification Ministry said the government consulted with neighboring countries about the aid, but didn't mention how they reacted.

Tokyo has openly rejected the idea, saying now is not the time for dialogue with North Korea or aid donations and that the world needed to be on the same page in pressuring Pyongyang with sanctions.

Prime Minister Shinzo Abe of Japan directly told Moon during a phone call last week to reconsider the timing of the overture, which Moon shrugged off, saying humanitarian assistance needed to be dealt with separately from politics, according to Moon's spokesman, Park Soo-hyun.

Washington has not directly mentioned the aid plan, though Trump disparaged Moon's "appeasement" of North Korea on Twitter earlier this month, and threatened to "totally destroy" the country in an address to the UN General Assembly Tuesday if the United States is "forced to defend itself or its allies."