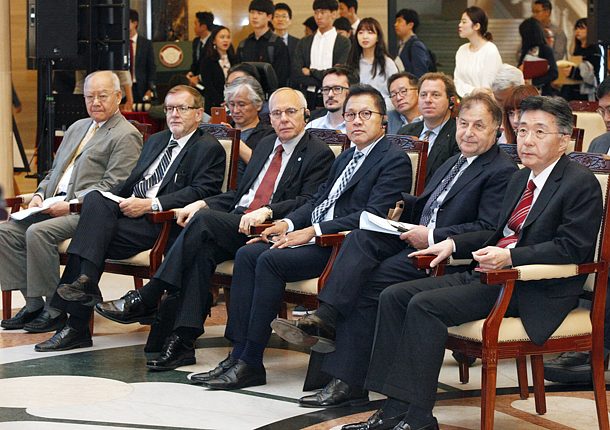 To celebrate the 36th anniversary of the UN International Day of Peace, Kyung Hee University hosted a Peace BAR Festival on its Seoul campus Thursday to discuss the historical meaning of last year’s candlelight vigils and the role of civil society in Korean democracy.

“It’s been nearly a year since some 14 million people flooded the streets of Gwanghwamun and raised their voices against the way the government was working at the time,” said Kyung Hee University President Choue In-won, addressing the audience in the Grand Peace Hall. “Those who witnessed it saw that there was something quite different from demonstrations in the past and that was the peace at these rallies. People spoke and criticized corruption in the government and its leadership, but all was carried out peacefully. Here you could see a new awakening, a new movement among the people to right what is wrong in society.”

“We cannot put our hopes entirely on politics and academia now,” he said. “The future is in the hands of a civil society that has the vision to right wrongs and the energy to overcome the limitations of this world. An awakened civil society may be the answer to our future.”

“On this international Day, we call for a global cease-fire,” said UN Secretary-General Antonio Guterres in a video message. “We must never - ever - stop pressing for an end to armed conflict. Peace is the right and the desire of all people. It is the foundation for progress and well-being - happy children, thriving communities, and peaceful, prosperous countries.”

“True to its spirit of humanist scholarship, your university is holding today an important conference on challenges to peace,” said Irina Bokova, director-general of Unesco, in a recorded message. “This has never been more relevant. We are living in turbulent times when we all feel in our hearts and minds the extreme fragility of peace.”

The audience heard from activists and scholars who have experienced democratic movements throughout the world.

“I have a set of significant dates in my life and one was in September 1964, I was a freshman at UC Berkeley and a very active student protest began on campus that year,” said Garry Jacobs, CEO of the World Academy of Art and Science. “Then in 1968, I was in Prague, one week before the Soviet tanks came in and destroyed it. It was my first personal experience with what it meant not to have freedom.

“Another date I consider of great significance was when I was invited to be here,” Jacobs said. “When the invitations went out last year, I don’t think people imagined that the candlelight movement would have happened. The future is happening here now, the way it happened in Berkeley in 1964 and the way it did it Europe.”

He continued, “I was attracted to theme of this conference because the emphasis was on social movements, and the candlelight movement here demonstrates the truth that the real power was always with the society.”

“The question is, what is the nature of these critical social movements?” said Michael Zantovsky, executive director of the Vaclav Havel Library. “Because they are more like phantoms, they are very short-lived. In then-Czechoslovakia, the organizations that organized and coordinated the Velvet Revolution died within six months [of the revolution].

“The candlelight demonstration involved singing, chanting and there was a lot of humor in these demonstrations. But one of the most difficult things [the Czech] had to deal with was coping with the past, coping with the crimes of the previous regime,” Zantovsky said. “How do you realize justice [after the revolution]? In some ways, by trying to realize justice, you could be committing more injustices and new crimes.”

The scholars, activists and students in the audience participated in the discussions.

“Let it not be lost in consciousness that the theme this year, ‘Together for Peace: Respect, Safety and Dignity for All,’ is about migrants and refugees,” said Liberato Bautista, former president of the Conference of NGOs in Consultative Relationship with UN.

“The spread of migrants and refugees, in their massive movements and dislocation not only in Europe but all over the world like the Rohingya in Myanmar, is really about finding citizenship, civics - a sense of global civics.” The Peace BAR Festival concludes today.