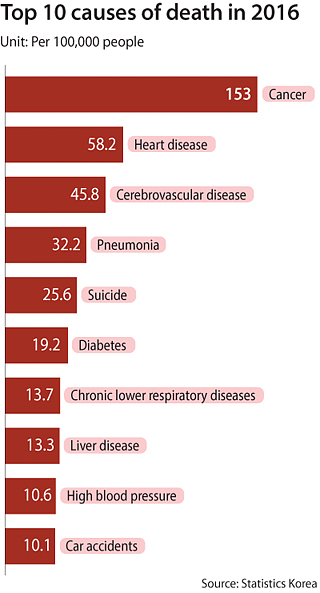 The largest number of Koreans died last year since the government began tracking mortality data in 1983, according to the latest figures released Friday, in yet another sign that Korea’s society is rapidly aging.

Korea also maintained its undesirable spot as the country with the highest suicide rate in the OECD, with nearly 25 out of every 100,000 people in the general population taking their own lives last year, more than twice the OECD average of 12 per 100,000.

Suicide was the fifth-leading cause of death last year. The No. 1 factor was cancer, which accounted for 27.8 percent of deaths. For the first time in Korea, the number of people who died from colorectal cancer exceeded those who succumbed to stomach cancer, traditionally the leading cause of cancer deaths.

The second-most common cause was heart-released diseases, and third was cerebrovascular diseases.

Those 80 and older comprised the largest deceased group last year, at 42.5 percent, up 1.7 percentage points from the previous year. Those between the ages of 60 and 70 accounted for 38.9 percent of deaths, while those in their 40s and 50s made up 15 percent. About 3.6 percent of people who passed away last year were under 40.

Men accounted for about 54 percent of deaths and women 46 percent. The disparity between the two genders was the widest among those in their 50s, where the male mortality rate was nearly three times larger than that of women.

The statistics agency noted that the number of deaths from dementia more than doubled last year from a decade ago to more than 9,000.