Gov’t focuses on loans to self-employed

Gov’t focuses on loans to self-employed 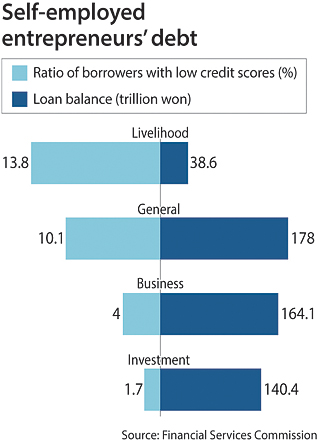 This is the first time a figure for loans borrowed by small entrepreneurs has been released.

The figure was released by Kim Yong-beom, Vice Chairman of the Financial Services Commission, on Friday during a lecture at the Korea Advanced Institute of Science and Technology (Kaist) graduate school.

The figure was much larger than the 480.2 trillion won estimated by the Bank of Korea.

The FSC broke down loans held by self-employed entrepreneurs into four types: loans taken out to live on, for the business, for investments and a general category.

Loans in the general category were the largest at 178 trillion won, followed loans for the business (164.1 trillion won), for investment, which also included real estate leases (140.4 trillion won). Loans for livelihood purposes such as paying for food or paying bills only amounted to 38.6 trillion won. Livelihood loans were commonly taken out by people with low credit ratings. In Korea, credit scores are on a scale of 1 to 10 with 10 being the lowest.

In total, borrowers with credit scores between 7 and 10 hold 32.2 trillion won in loans, meaning 6 percent of the entrepreneur borrowers will be vulnerable if interest rates rise.

The government is currently working on overall household debt policies that are scheduled to be released in October. The policies were supposed to be announced earlier this month. The government decided to push back the date because it realized they could have a major impact and wanted to prepare more carefully.

Next year, the government will be adopt a program to help self-employed entrepreneurs, which includes 50 billion won in financial aid to be used to reduce debt.

The issue of self-employed businesses has become prominent since the early 2010s when millions of baby boomers born between 1955 and 1963 started retiring from office jobs.

Many open their own stores with their severance payments, supplemented by loans.

Young people freshly out of college are starting businesses too after having trouble finding jobs at corporations.

Unemployment among people aged between 25 and 29 years of age has been above 9 percent while the overall unemployment rate is in the 3 percent range.

Korea is believed to be one of the top five OECD members when it comes to its proportion of self-employed people. It is estimated that as of 2015 the ratio of Korea’s self-employed businesses to all businesses was around 25.9 percent, higher than the OECD member countries’ average of 15.4 percent.

But many small businesses fail. There’s particular concern about interest rates rising if the central bank decides to tighten monetary policy. Self-employed businesses will have trouble paying back their loans.

A government report released earlier this year, reported that the number of self-employed who had fallen into poverty went up in 2015, failing to even make 12 million won a year.

Every year, roughly 1 million people start their own businesses but some 800,000 close.

Between 2004 and 2015, more than 9.67 million small businesses were opened and 7.99 million closed shop. That means self-employed businesses have a survival rate of 17.4 percent.

The restaurant business had the highest rate of failures at 21.58 percent.