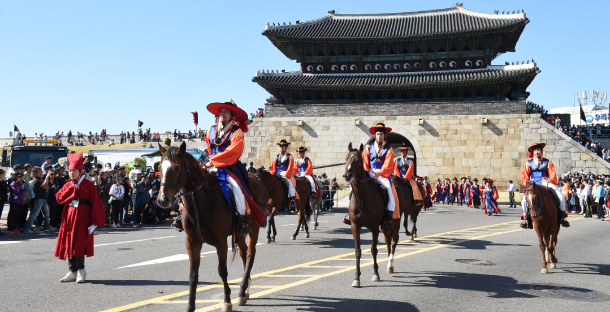 For the first time, the King Jeongjo Tomb Parade Reenactment will cover the entire route King Jeongjo took from Changdeok Palace in Seoul to the Yungneung tomb after his father’s death. The route is 59.2 kilometers (36.7 miles). [JOONGANG ILBO]

The royal parade of King Jeongjo of the Joseon Dynasty (1392-1910) to honor his father will be revived today and Sunday. It is the first time the full parade from Seoul to Hwaseong, Gyeonggi will be presented.

The King Jeongjo Tomb Parade Reenactment will have people dressed in traditional garments walk 59.2 kilometers from Changdeok Palace in Jongno District, central Seoul, to Hwaseong Fortress in Suwon, and then to Yungneung in Hwaseong, a tomb where King Jeongjo’s father Crown Prince Sado is buried. The parade is part of the 54th edition of the Suwon Hwaseong Cultural Festival, which started Friday.

Last year the Seoul and Suwon Metropolitan Government collaborated to make the 47.6 kilometer-long parade from Changdeok Palace to the fortress, but not to the Yungneung. The city of Hwaseong didn’t join to make the course complete due to financial reasons.

King Jeongjo, known as a very filial son, made 13 trips to his father’s tomb during his reign after he relocated the tomb in 1795 to its current location. Among the many trips he made, the one made in 1795 was the largest in size and lasted eight days. That year marked the 60th birthdays of King Jeongjo’s mother, Queen Heonkyung (also known Haekyunggung Hong), and his deceased father. It also marked the 20th year of King Jeongjo’s enthronement.

For this year’s parade, a total of 4,580 people will participate from Jongno, Yongsan, Dongjak, and Geumcheon Districts in Seoul and Anyang, Uiwang, Suwon and Hwaseong in Gyeonggi. There are 16 teams of musical performers and 690 horses. Today, the parade from the palace will go toward Sungnyemun and then go through Nodeul Island - close to Yeouido - until it arrives at the ruins of Siheung Haenggung, a palace built so that royals could take a rest during long travels throughout the country.

The King Jeongjo Tomb Parade Reenactment will start from Changdeok Palace and continue to Yungneung, where Crown Prince Sado is buried. [JOONGANG ILBO]

On Sunday, the parade will start from Geumcheon District Office and pass through Anyang and Uiwang to arrive at Suwon Hwaseong Fortress around 6:40 p.m. Since the parade takes a long time, the team that will make a walk from the fortress to the tomb will leave separately at 9 a.m. on Sunday.

Since many people may want to come out to see the parade or even participate in it, the Suwon Metropolitan Government set up a committee of 250 people in March. They are divided into six different subcommittees so that each can take a charge in either putting together events for people who come out for the parade, or focusing on safety issues.

The committee came up with 10 different programs. Five additional ideas were pitched from the general public, such as singing competitions and performances by professionals.

During the festival, the Suwon Museum, Suwon Hwaseong Museum and Suwon Gwanggyo Museum will have free admission.