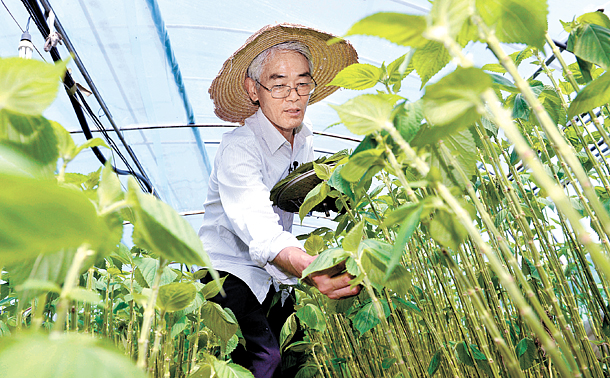 Jeong Chun-guk, who served the longest time in Korea for conscientious objection, seven years, is now a farmer. [KIM SEONG-TAE]

For 69-year-old Jeong Chun-guk, whose seven years and 10 months in jail is still the longest time ever served by a conscientious objector to mandatory military service in Korea, the struggle for peace has finally led him to a tranquil plot of land in Geumsan County, South Chungcheong, where he can focus on farming and his faith.

“I believed that it was more important to spread the new world I discovered within the Bible,” he says of his decision not to serve in the military. He had followed his mother’s footsteps, becoming a Jehovah’s Witness when he was a freshman studying medicine at Chungnam National University in Daejeon.

Jehovah’s Witnesses have traditionally held a view that worship should be only to the “Kingdom of God,” therefore banning allegiance or participation in any national government or politics among their faithful. Though taught to obey the laws of where they inhabit, Jehovah’s Witnesses have been known to disobey the laws that conflict with their doctrines, such as denying blood transfusion and refusing to serve military duties.

His father, a prison officer, was at a loss for words upon hearing that Jeong had dropped out of school after only one semester.

“The watchtower my father climbed with his lunch box seemed like a great dungeon from some novel,” he says. “I never imagined that I would live in such a place.”

When Jeong turned 21 in 1969, he was incarcerated for 10 months, at the height of anti-communist sentiment following the Blue House raid on Jan. 21, 1968, when North Korean commandos attempted to assassinate then-President Park Chung-hee.

After the October Restoration of 1972, in which Park assumed dictatorial powers, conscientious objectors and their families were publicly shamed and the penalty was sharply increased with amendments to the Military Service Law and the new Special Acts for Violation of Military Service Law.

At 26, Jeong received another draft notice and arrest warrant. He sent Daejeon District court a seven-page appeal, but the appeal judge sentenced him to three years in prison, twice the initial sentencing.

Prison guards, he came to learn, were particularly brutal towards Jehovah’s Witnesses. “Fearing that Jehovah’s Witnesses might proselytize, they did not make us work. Instead we were forced to sit down for the whole day. The only times we could stand up were during our three meals and 15-minute exercise sessions,” says Jeong. “We prayed so that we may work standing.”

In those days, the Military Service Law did not allow exemptions from service until three years of penal labor had been served. The Supreme Court deemed it legal to repeat this punishment every time military service was declined, so Jeong was sentenced again in 1974.

Upon completing his second sentence at 29, he asked the Military Manpower Administration why a university dropout like himself was being drafted.

The Military Service Law back then considered candidates eligible for active duty from the time they graduated high school until the age of 28. But for undergraduates, this was extended to 30.

The administration replied that even freshman dropouts were considered undergraduates.

One day in February 1977, as he was waiting to finally go home, Jeong was taken to the 32nd Infantry Division.

He received another four years in jail from the military court on the conviction of “disobeying orders.” “I thought this was the end,” says Jeong, “I remember crying at the sight of my mother’s tear-filled eyes.”

“It was strange to see no one stalking me from behind as I walked home,” he says.

Recently, a lawyer advised him to re-open his case, but Jeon has decided against this. “It’s not impossible to empathize with those who try to protect society by policing those who step out of line,” he says, “even if they have the strangest reasons.”