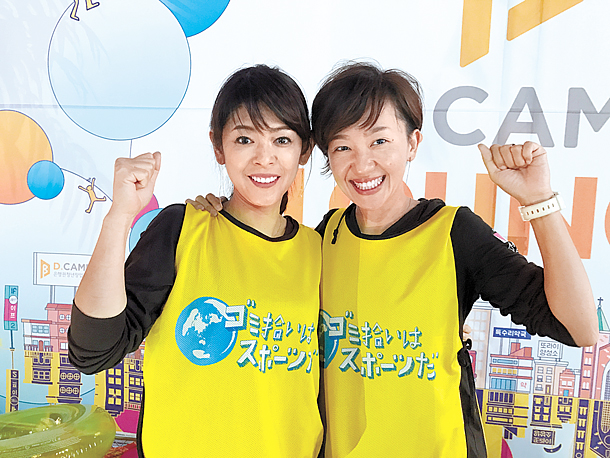 Mayuko Fukudome, left, and Umekita Nako pose for a photo as they take part in a garbage collecting event in Korea on Sept. 16. [YANG BO-RA]

About 40 people wait in line holding piles of garbage at a plaza near the U-Plex shopping mall in Sinchon, western Seoul. The time was 7 p.m. on Sept. 16. With their foreheads soaked with sweat, they arrived there after spending one hour collecting waste on every corner of the streets in the crowded area.

When the judges announced their scores based on the scaling of the waste they collected, people screamed in joy and excitement. The citizens took part in a garbage pick-up competition, an event that has evolved into a kind of sport.

Kenichi Mamitsuka, a 50-year-old from Japan, is a pioneer in promoting the event, founding and heading an association called the Federation of Sports Waste Collection of Japan since 2008. Since then, a total of 581 competitions have been held in Japan where 6,782 people participated. As it was recognized as an official sport at the 2020 Tokyo Olympics and Paralympics, the Sinchon event was designed to select a national team to compete for the segment.

Members of the Federation of Sports Waste Collection of Japan were invited as the judges for the regional preliminary round.

The JoongAng Ilbo met two of the members - Umekita Nako and Fukudome Mayuko - there to discuss the objectives of the association and the effect of the spread of the trash pickup campaign.

Q. What is the federation about and what brought you to the body?

A. We came from Kagoshima Prefecture in Kyushu and went to middle school together. Two of us just packed and visited Tokyo to meet Kenichi Mamitsuka since we identified with the motto of this sports game. Then, we became the heads of Kyushu branch to promote and raise awareness of the trash pickup initiative. But we have a separate job to make a living. Umekita runs a restaurant and Fukudome works at an ad production company.

Why is the garbage pickup game so popular in Japan?

The most popular event was held at Tokyo in 2016 where 105 teams and 518 people took part. The key to success is our approach to think of garbage pickup not as a social welfare activity but as a sports game. There is no prize, but the winners could feel the sense of achievement. The competition gets fierce since we plan to reward special medals for the winner.

We’ve held the game in Malaysia, Myanmar and Russia. In the Russia game, we collected 1 ton of garbage, the most from a single event. After this Sinchon competition, another game is scheduled in Jeju Island on Sept. 23. When the 2018 PyeongChang Olympics nears, we plan to hold one near Gangneung in Gangwon.