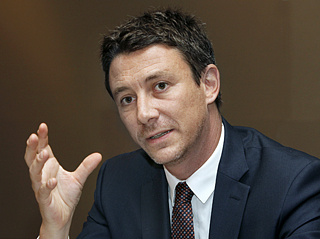 France’s junior economy minister, Benjamin Griveaux, told reporters on Friday after his meeting with Korean Minister of Trade, Industry and Energy Paik Un-gyu that the French government is ready to build a more “strategic relationship” with Korea.

“Korea and France share similar values,” Griveaux said in a press conference at the Intercontinental Seoul Coex in southern Seoul, “especially on technology, innovation, energy, and on the fourth industrial revolution. I have spoken earlier today with Minister Paik and we talked about the nuclear energy, as it is a very important energy source to France and Korea.”

Griveaux visited Seoul for the Asia-Europe Meeting (ASEM) at COEX from Thursday to Friday, held under the theme “Reconnecting Asia-Europe: Innovative Partnership for Inclusive Prosperity.” He is the first minister of France to visit Korea after President Emmanuel Macron was elected in May.

“France is committed to fighting climate change,” said the French minister, who was Macron’s spokesman during his election campaign. “And for this, we are hosting meeting on it in December, presided by the president, and he has invited the Korean government to take part as well.”

He added, “It is through multilateral meetings, like the ASEM, that countries can pursue comprehensive and sustainable growth and free trade together, and fight back protectionism and climate change. You will see a changed France with the new administration. France in the past didn’t pay attention to Europe, but now, it will be opening up discussions with the people throughout Europe to build a future together.”