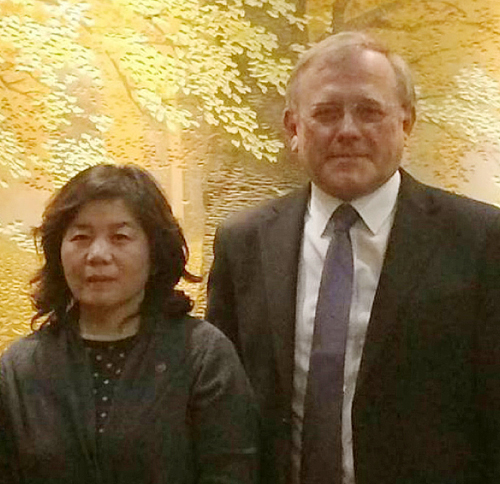 Choe Son-hui, left, poses with Russia’s ambassador to Pyongyang, Alexander Matsegora, in a photo captured from the embassy’s Facebook account on Tuesday. [YONHAP]

A senior North Korean diplomat in charge of relations with the United States plans to visit Russia next week to discuss security issues, a source said Friday.

Details of the planned talks are not known, but the two sides are likely to discuss ways to break out of an ongoing security stalemate surrounding North Korea’s nuclear weapons development.

Earlier this month, North Korea carried out its sixth and most powerful nuclear test yet and test-fired an intermediate-range ballistic missile over Japan, which resulted in an angry backlash from the rest of the world.

The upcoming talks come in addition to a series of previous North Korea-Russia consultations.

On Monday, Choe met with Russian Ambassador to North Korea Alexander Matsegora in Pyongyang as part of the continued discussions.

Russia has been unusually vocal in its call for a diplomatic solution to the North Korean nuclear issue amid a growing war of words between Pyongyang and Washington.

Earlier this month, American chief envoy on the North Korean issue Joseph Yun was invited to Russia to discuss the issue with his Russian counterpart there.