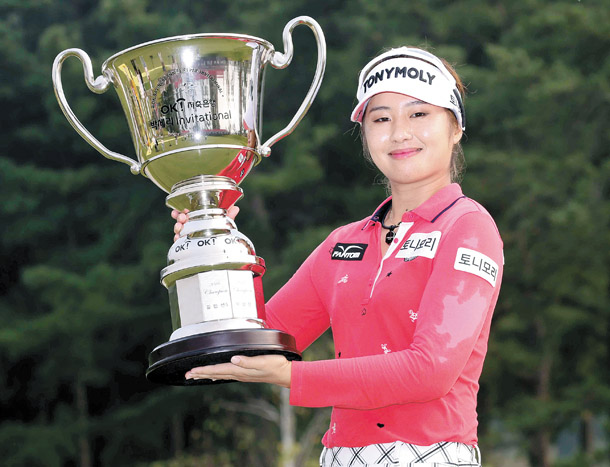 With a record low second round, Lee Jeong-eun captured her fourth victory of the season on Sunday at OK Savings Bank Pak Se-ri Invitational at Lakewood Country Club in Yangju, Gyeonggi.

Though Lee got off to a slow start by shooting 70 to finish the first round tied for 29th, followed in the second round by 60, 12 under par, to jump to the top of the leaderboard and take a three shot-lead ahead over Kim Ji-hyun heading into the final round. The round of 60 allowed Lee to set the KLPGA Tour history for the lowest round, as the previous record was 11 under par, 61, set by Jeon Mi-jeong during the second round of the 2003 Paradise Ladies Invitational.

Also, during the final round, Lee didn’t let her second round affect her mentally, as she finished the tournament shooting four under par in the final round. Kim’s birdie on the par-5 first hole allowed her to get within two shots of Lee, but Lee responded with birdies on second, fifth and seventh to extend her sole lead. Though Lee made a bogey on the par-4 ninth hole, it didn’t affect her on the back nine, as she made two additional birdies and finished the rest with pars.

“It’ll be an unforgettable tournament,” Lee said during a press conference after her victory. “I achieved my fourth career victory earlier than expected and set the record for the lowest 18-hole score [on the KLPGA Tour]. I felt quite some pressure since I usually didn’t play well after the best round but I’m proud of myself for overcoming that.”

With a winning purse of 140 million won ($123,523), Lee is well on pace to exceed career earnings of 1 billion won, which has only been done by Kim Hyo-joo and Park Sung-hyun on the KLPGA Tour.

Lee already had a great first year on the KLPGA Tour by winning the Rookie of the Year award, but this year, she is doing even better, having already won a total of four tournaments and leading the KLPGA Tour’s prize money, scoring average, player of the year points and the top-ten finish percentage.

Though Lee had a great season in her first year on the Tour in 2017, she never won a tournament. But now she has redeemed her winless debut by winning the most number of tournaments on the KLPGA Tour this season, starting with the Lotte Rent a Car Ladies Open, and consistently finishing on top of the leaderboard.

Park, who played on the KLPGA Tour event for the first time this season, finished tied for 36th, by shooting two under par in the final round.

Despite the fans’ expectations this weekend based on her dominance on the LPGA Tour this season and her success on the KLPGA Tour in 2016, she failed to finish inside top ten, struggling to play with a new putter.

“My scores this weekend were disappointing, but I had a great weekend with so many fans coming out to watch me play,” Park said during a press conference after the round.

Bae Seon-woo moved up eight spots on the last day to finish the tournament runner-up by shooting eight under par in the final round. And Choi Na-yeon, who played on the KLPGA Tour for the first time in three years, finished tied for 22nd with a total score of nine under par.

On the KPGA Tour, Kim Seung-hyuk had a wire-to-wire victory at the Genesis Championship at Jack Nicklaus Golf Club Korea in Incheon on Sunday. Kim was dominant on the course this weekend, as he had an eight shot lead heading onto the final round.

With a victory, Kim became the second multi-winner this season on the KPGA Tour and is now the new money winner for the season, by winning the tournament with the highest winning purse of 300 million won. A win has allowed Kim to earn an exemption to two PGA Tour events - the CJ Cup @ Nine Bridges in Jeju next month and the 2018 Genesis Open.