Bottega Veneta, Missoni knock them in the aisles

Bottega Veneta, Missoni knock them in the aisles 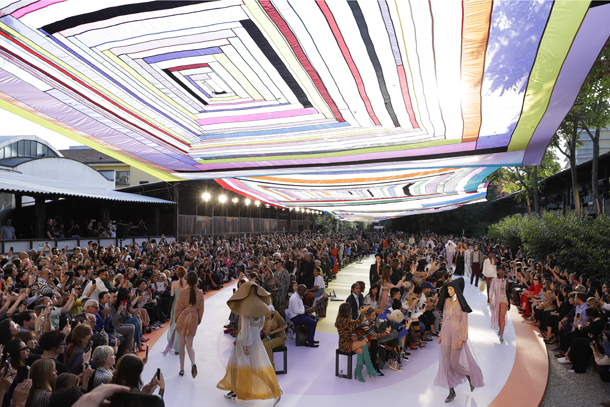 MILAN - It’s a season of celebration and commemoration at Milan Fashion Week, in its fourth day Saturday.

Angela Missoni marks 20 years as creative director at the family-owned and -run brand founded by her parents.

Donatella Versace made an emotional tribute to her brother, fashion house creator Gianni Versace, to honor his contributions to the fashion world and his vision of female empowerment 20 years after he was slain.

And Vogue Italia feted its new editor, Emanuele Farneti, with the party of the week inside a former customs station.

Here are some highlights of the womenswear previews for next spring and summer on day four in Milan, featuring Bottega Veneta and Missoni.

Tomas Maier gave a youthful edge to the new Bottega Veneta collection, infusing the looks with metallic and beaded accents that gave sparkle to a rich palette of rose, ocean-blue, lilac, moss and denim.

The combined men’s and women’s show illustrated Maier’s careful bridging between heritage and modernity. To underline the point, the creative director invited this generation’s supermodels to walk the runway and longtime brand icon Lauren Hutton as an honored guest.

Gigi Hadid rocked the runway in a denim dress covered with silver eyelets and a fringe that flew as she took a corner. Her sister Bella Hadid wore a white version of the same. Kaia Gerber - daughter of supermodel Cindy Crawford - walked in a satiny romper with a crisscross neck under an anorak. Kendall Jenner wore a seafoam green bodysuit under a trench.

The looks were utilitarian with an edge, and their understated colors allowed for easy combining for a lifetime of use. The technical prowess of the fashion house came out in a series of intricate snakeskin patchwork pieces that recalled cathedral stained glass, on jackets, shoes and bags.

“Modernity is the way something is made,” Maier told reporters backstage. “Modernity is not square and hard. It is how you conceive things and how you make them work.”

Lauren Hutton graced the Bottega Veneta front row on Saturday holding a dusty rose version of the purse she memorably clutched in the 1980 film “American Gigolo.” By any measure, she is the fashion house’s first supermodel.

Nothing projected power more than the matching knit bodysuits and superhero-style capes.

While Missoni may be most popularly associated with the zig-zag knit, the runway collection made amply clear the variety of patterns: vertical stripes, pretty eyelets, color-blocking, brand historic jacquards and even a Marilyn Monroe knit based on the Andy Warhol painting.

Colors started off in pale shades and got gradually stronger until they darkened to black.

“These are the lightest knits I have ever made,” the designer said backstage.

For the first time, Missoni also included menswear alongside the women’s looks, pairing sleeveless sunrise pattern knitwear with trousers, or a sunset pattern jacket with shorts. Scarves finished many of the men’s looks.

Formula 1 driver Lewis Hamilton was among those attending the runway show, held in a former factory yard under a tent of colorful foulards designed by American artist Rachel Hayes.