Remodeling is rage in real estate

Remodeling is rage in real estate 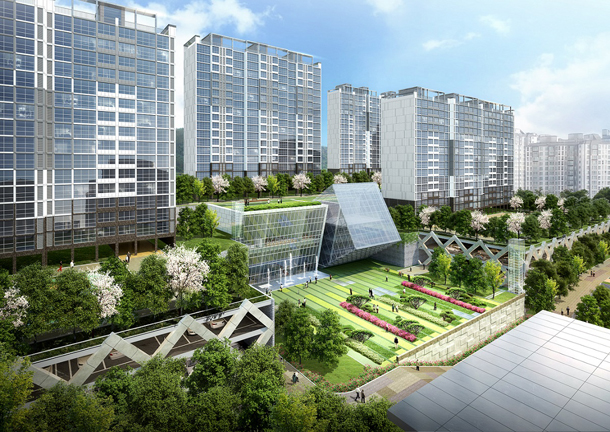 Ssangyong E&C’s computer rendering image of Kukdong Apartment in Oksu-dong, eastern Seoul after it is remodeled. The construction company won the project on Sept. 16. [SSANGYONG ENGINEERING AND CONSTRUCTION]

On Sept. 16, Ssangyong E&C won the rights to “remodel” the Oksu Kukdong Apartments in Seongdong District, eastern Seoul after 92 percent of 596 homeowners that attended a meeting voted in favor of the construction company.

The apartment complex was built in 1986 and has eight 15-story buildings with single basement floors. The total number of apartments is 900.

After remodeling, the buildings will have 18 stories with five basement floors each. The total number of units will be 1,035.

That’s a lot of remodeling. Although the complex will be almost totally transformed, it’s not technically a redevelopment or reconstruction - for which different rules apply. The Moon Jae-in government has tried to cool off the market for redeveloped apartment complexes.

“Due to the government’s recent intensified real estate measures, there has been an increase in apartment complexes that are choosing remodeling instead of reconstruction,” said Lee Kwang-min, head of Ssangyong E&C’s remodeling team. “We plan to focus our business in winning remodeling projects in good areas such as the first new cities [built in the early 1990s] along the Han River and also near subway stations.”

The big distinction between remodeling and reconstruction is that the former buildings are not demolished.

The basements will also have other facilities such as cafeterias, a ballroom, fitness center and a library.

New floors on top of the buildings will result in 135 new units, which will be sold, partly paying for the remodeling costs.

Construction time is far shorter than for total redevelopments. Current apartment owners can sell their seats on the reconstruction committee unlike in full redevelopment projects. And owners of remodeled apartments are not subjected to a certain tax.

Under a regulation first adopted in 2006, owners of reconstructed apartments must pay a tax of as much as 50 percent of the profit they make when the value of the apartments increases more than 30 million won ($26,500) after rebuilding. The tax was temporarily suspended until the end of 2017.

“There’s a huge demand for new apartments but because there’s no land available to build large-scale new cities as in the past, there’s a limit,” said Cha Jeong-yoon, vice chairman of Korea Remodeling Association. “There will be a natural shift from reconstruction of low-story apartments to remodeling.”

The No.1 remodeler, Ssangyong E&C, is close to having an accumulated order book of 10,000 remodelled apartment units. Posco E&C has jumped into the business after it created an exclusive team dedicated to it in 2014.

Posco E&C in in the process of remodeling Hyundai Apartment in Ichon-dong, the first remodeling project in the Yongsan area.

According to real estate information provider Budongsan 114, 45 apartment complexes are pursuing remodeling in the greater Seoul area. Most were built between 1980 and 1990 with heights between 12 and 15 stories.

In the case of Hansol Village, which was the first of the new cities built in the late 1980s and early 1990s to pass a remodeling safety evaluation, it is trying to build three additional stories on top and adding another apartment building.

“Remodeling discussions are particularly active in apartment complexes that face low profitability if reconstructed due to a high floor area ratio,” said Yoon Ji-hae, a senior researcher at Budongsan 114.

Remodeling has fewer restrictions on the floor area ratio compared to reconstructing, and allows more additional new apartment units to be built.

The floor area ratio, which is the total floor area of the building to the land it is built on, is a key factor in the profitability of a reconstruction project. The higher the ratio, the lower the profit because fewer additional apartment units will be sold to new homebuyers.

When the ratio exceeds 180 percent, reconstruction becomes less profitable because existing owners will either have to shoulder a higher cost or sell the newly built apartments at a much higher price.

Remodeling is similar to reconstruction in the sense that it improves the living environment by upgrading buildings. But the way it is done is entirely different.

Remodeling regulations were first adopted in 2003.

In order to get approval for reconstruction, buildings have to be 30 years old or more. Remodeling can be done on buildings only 15 years old.

In reconstruction, a large number of additional apartments can be built for sale to other homebuyers, which reduces the cost of redevelopment for existing owners. But there are several regulations including a requirement to build apartments for lease to lower income households.

Apartments that are 15 stories high can add an additional three stories. Smaller building can only add two stories.

The regulations for remodeling were further eased this year. Remodeling only needs to be approved by 75 percent of the apartment owners. Previously it was 80 percent.

However, the government kept a regulation that prevents the breaking down of bearing walls for safety reasons. When the bearing walls remain, that can limit expanding the size of the newly remodeled apartment.

The government decided to suspend a decision on whether to allow the breaking down of bearing walls until March 2019.

One of the most successful remodelings was of Dogok Ssangyong Yega Classic apartment in Gangnam.

Built in 1978, the building underwent a 31-month remodeling. After the remodeling was completed in 2011, five 12-story buildings with single basement levels were revamped. One building added a floor and all five added two basement levels.

The previous owners had to pay 195 million won each. No new units were created in the remodeling.

After the remodeling, the apartments’ values saw a significant increase.

According to the Ministry of Land, Infrastructure and Transport, the 84 square-meter was sold for an average price of 680 million won in the second quarter of 2007. A decade later, the average price for a remodeled apartment was 1.1 billion won. Even when including the construction costs that the apartment owners had to pay, their return was 25.7 percent.

During the same period, apartment values in the same neighborhood dropped an average 10.3 percent.

“In a remodeling, the size of the apartment expands and the old place turns new, which is the same as a new apartment,” said Shin Jung-seop, an analyst at Shinhan Bank’s real estate investment consulting center. “Although it is not as profitable as reconstruction, the value of the apartment rises.”

But not all agree that there’s a bigger profitability, especially with the bearing wall regulations remaining.

“Many of the regulations [on remodeling] have been lifted,” said Park Won-kap, KB Kookmin Bank wealth management senior consultant and real estate expert. “But as the bearing walls remain, the profitability is still not high enough. It is best to approach the idea with caution if the purpose is investment.”