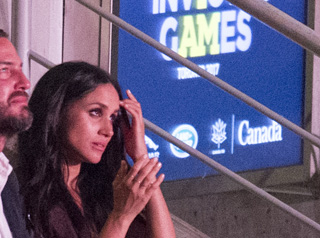 Prince Harry’s girlfriend, American actress Meghan Markle, is sitting in the stands for Saturday’s opening ceremony of his Invictus Games for wounded veterans in her first appearance at a public event with him.

Markle lives in Toronto, but hadn’t appeared with Harry since he arrived in the city. She recently told Vanity Fair they’re in love.

They were not sitting together in the stands of the Air Canada Centre.

They were about four rows apart but Harry looked over at her when the Canadian anthem played. A security guard blocked at least one fan from taking pictures of Markle, who sat with friend Markus Anderson, a party consultant.

Markle, 36, was wearing a brown leather jacket over a dark dress.

She is known for her portrayal of a paralegal in the television show “Suits.”

The Invictus Games are the creation of Prince Harry, who got the inspiration to help wounded and sick military personnel and their families after his two tours of duty in Afghanistan. This is the third Invictus Games.

About 550 competitors from 17 countries are slated to compete in 12 sports over the next week. U.S. first lady Melania Trump and Canadian Prime Minister Justin Trudeau also attended the opening ceremony.

Bruce Springsteen and Bryan Adams will perform at the closing ceremony next Saturday.

U.S. Master Sgt. Brian Williams, who had his left leg amputated at the knee because of an improvised explosive device in Afghanistan in 2012, said Harry is living up to the legacy of his late mother Diana with his charity work.

“He’s following in his mother footsteps. Straight up,’’ Williams said.

Williams said he has a lot of respect for Harry, a former soldier who served in Afghanistan. “He doesn’t have to do this but he is,” he said.

Williams was working as a dog handler during his second deployment in Afghanistan when he was severely injured while clearing a Taliban compound. Despite his injuries he has worked hard to stay on active duty. He also competed in last year’s Invictus Games in Orlando and he’s taking part in wheelchair basketball and sitting volleyball this year.

Canadian Melanie Harris is set to compete in bioarchery. Harris did two tours of duty in Afghanistan with the Canadian military. She would help carry bring in wounded soldiers to the medical facilities on base. She has since struggled with post-traumatic stress disorder.

“I was living without passion, without purpose. I needed to believe in myself again and I needed to be inspired. And these Invictus Games that’s what they did,’’ Harris said.