The Genesis G70 is Hyundai Motor’s latest attempt to compete against the BMW 3 Series and Mercedes-Benz C-Class. [HYUNDAI MOTOR]

Can Hyundai Motor take on German heavyweights such as BMW and Mercedes-Benz with its latest addition to its luxury brand, the Genesis G70?

The luxury D-segment market in Korea is largely dominated by German vehicles such as the BMW 3 Series and Mercedes-Benz C-Class. Hyundai, Korea’s leading automotive company, has a flagship model in the D-segment, but the Sonata isn’t really considered a competitor to the 3 Series or C-Class.

This is where the G70 finally comes in.

The four-door premium sedan released last week is the latest ace in the deck for Hyundai as it aims to gain ground in the luxury car market by expanding its offering. 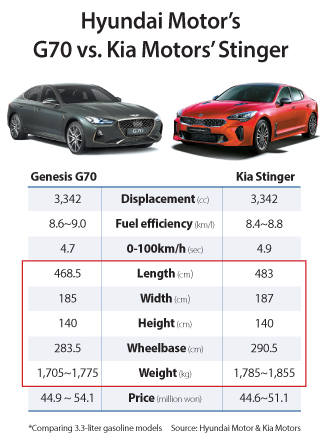 The G70 is off to a promising start.

The company began sales of the new premium sedan on Wednesday and landed 2,100 purchase contracts on the first day, nearly half of its sales target for the year - 5,000 vehicles.

The Korea JoongAng Daily had an opportunity to take the new G70 with a 3.3-liter V6 gasoline twin-turbo engine under the hood for a spin last week, driving through a 65-kilometer (40-mile) course from Seoul to Pocheon, Gyeonggi that included a freshly-constructed highway.

At first glance, the vehicle reminds a driver of the premium sedan made by Hyundai’s sister company Kia Motors, the Stinger. Although the front grille of the G70, which takes after its bigger brother G80 Sport, distinctively differs from the Stinger, other features on the front show that Hyundai and Kia may share similar ideas on how a premium sports sedan should look. Popping the hood immediately reveals that the engine was pushed as far back as possible, which the company says was aimed to balance out the weight more effectively.

After hitting the highway, the speedometer quickly climbed to 100 kilometers per hour (62.5 miles per hour) with just a light touch on the accelerator in “regular mode.” The acceleration was smooth and quiet, making it difficult for anyone in the car, including the driver, to realize that they were traveling well over 120 kilometers an hour until the built in satellite navigation warned of a traffic camera only a kilometer away.

The company claimed that the vehicle can go from a complete stop to 100 kilometers per hour in just 4.7 seconds.

As soon as the driver changed the driving mode to “sports,” the side bolsters on the front seat tightened to better support the driver at high speeds. The color on the instrument cluster also changed from green to red and the sound of the engine, which Hyundai says is pumped out from the speakers inside the vehicle, turned more aggressive than before. Each mode - regular, sports and smart - features different engine sounds as well as transmission responses and traction controls.

There were, however, some disappointing factors.

Its main competitors, such as the BMW 3 Series, boast stable driving even at high speeds. The G70, however, began shaking.

Water bottles sitting in the cup-holders between the driver seat and the passenger seat began shaking at one point, apparent by the noise they made as they banged around inside the holder. These speeds far exceeded what the car is ever likely to reach on regular roads and highways, but if a driver ever decided to take the sports sedan for a spin on a private track they might be disappointed by the performance.

That said, the semi-autonomous driving system was impressive even at high speeds, and the car was even able to steer itself around a corner.

Like its cousin the Stinger, the G70 is also a rear-wheel-drive vehicle sharing a similar powertrain. The displacement for both the G70 and the Stinger’s V6 gasoline engines is 3.3 liters and the price of the two vehicles’ V6 versions ranges from around 45 million won ($39,770) to 55 million won, although the Genesis comes with a slightly steeper price tag.

But while the G70 is a mid-size sports sedan, the Stinger is based on the concept of a gran turismo, or grand tourer, a high-performing luxury car capable of high speeds and long distance driving. This disparity in identity makes the two vehicles completely different cars.

The G70 is nearly 100 kilograms (220 pounds) lighter than the Stinger, which means cornering, speed and overall control are easier. Kia has decided to sacrifice those features for the sake of comfort and reliability for long-distance driving.

Hyundai is scheduled to launch the G70 early next year.