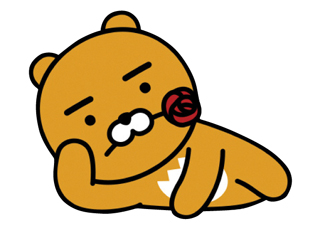 There’s a joke going around that the biggest breadwinner in Seoul is a lion. That’s a reference to mobile messenger company Kakao’s character Ryan.

In fact, according to the IT community, pre-orders of Kakao Mini, the company’s new smart speaker, sold out in just 38 minutes after it was released on Sept. 18.

But the reason demand for the speaker was exceptionally high was because of the Ryan doll was offered as a free gift with pre-orders.

That wasn’t the only time that Ryan contributed significantly to the sales of Kakao goods.

Ryan is also thought to be the driving factor behind the success of Kakao Bank’s debit cards. The online bank issued over 2.2 million debit cards in just a month after its launch in late July.

Customers can pick one of the four Kakao characters to be featured on their debit card. It turns out 53.4 percent of customers chose Ryan.

As a result, the character has been given nicknames by the public. He is called “Ryan jeonmu,” meaning senior managing director, an executive position, or “the all-time best sales employee.”

There’s even a joke going around that the character should be promoted to vice president. 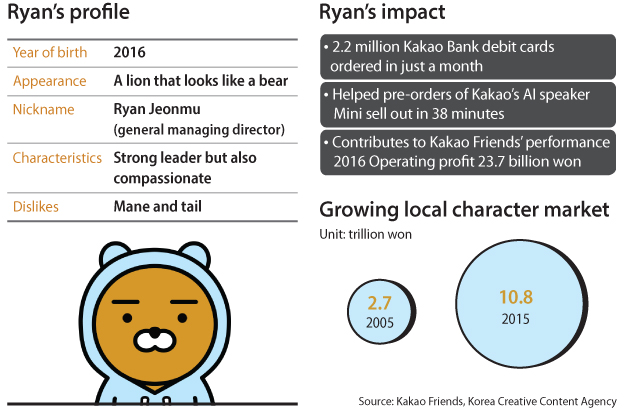 Ryan is a character that was introduced by Kakao’s affiliate Kakao Friends last year.

Ryan was created to act as the leader of Kakao’s seven other characters including the puppy Frodo, radish Muzi and peach Apeach.

But why is Ryan getting so much attention? Kakao speculates there are two reasons behind the immense popularity of the character.

One is that he doesn’t have a mane.

The story behind Ryan is that the lion has a complex about his lack of a mane and is often shy about it. Another is that he doesn’t have a long tail.

Ryan was in line to become the king of a remote island, but ran away as a young cub because he wanted a free life. His tail got shorter as it makes it harder for him to be caught.

These were the two flaws that the creators gave the lion character when they first came up with the idea.

“When it comes to local sentiment, if a character is too perfect, it loses appeal and is hard to form sympathy for,” said Lee Soo-kyung, Kakao Friends’ spokesperson.

“Every person has a weakness and we wanted to create a character that has that human quality so that anyone could feel familiarity.”

Korea College of Media Arts professor Park Seok-hwan explained that the character seems to appeal to consumers because of the contradicting features of being a ferocious beast but also having a cute look. Many people are also attracted to the flawed and humanized character.

But other says it’s because the character looks like a bear that it has a bigger appeal on the international market.

“As you can see in the teddy bears that have a lot of popularity globally, [Ryan] resembles a bear, which is a design with wider appeal,” said Lee Mun-jong, a researcher at Shinhan Investment Corp.

“It can be applied to diverse products and other characters like an alligator or a peach.”

Also, Kakao Friends’ strong marketing push after the character was released contributed to the significant rise in its popularity.

One example is the mood lamp that is exclusively designed in the shape of Ryan.

The company’s flagship store in Gangnam has even installed a table and chair where visitors can sit across from a Ryan doll, which has far more exposure than other characters.

This eventually raised the profile of the character compared to his peers.

With the popularity of Ryan skyrocketing, Kakao Friends was able to report revenue of 70.5 billion won ($62.3 million) with an operating profit of 23.7 billion won. The operating ratio to revenue was 34 percent.

Ryan’s success is becoming an example of how a well designed character can contribute to the influence of a software developer.

“Unlike the manufacturing industry, it’s difficult to find a differentiated tangible look,” said an industry insider, requesting anonymity. “There aren’t many tools in creating a brand that could reach customers with familiarity and that’s why they are developing characters.”

Naver, the Web portal giant, has made 6 billion won in net profit last year through its own character business.

The overall local character market is growing at an exponential rate.

According to the Korea Creative Content Agency, the local character market is estimated to be worth almost 11 trillion won as of last year. The market expanded fivefold compared to 2 trillion won in 2005.

Unlike in the past, when most of the characters were targeted at young children, today the main customers are adults.

“As adults are more clumsy in expressing their feelings than children they are immersed in the simple clarity of the characters and use them in communicating,” said Korea College of Media Arts professor Park.