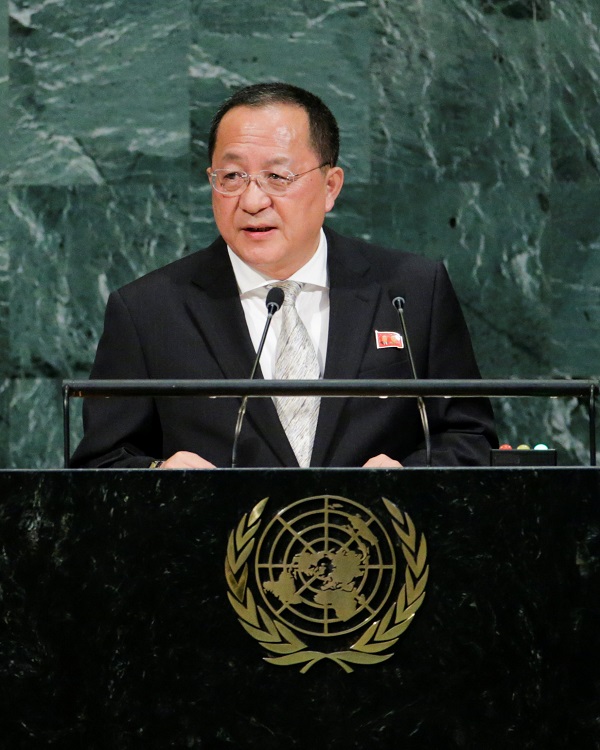 North Korea’s Foreign Minister Ri Yong-ho threatened to take “merciless preemptive action” against the United States in case it shows any sign of military attack, calling U.S. President Donald Trump the “gravest threat” to international peace and security during an address to the United Nations General Assembly on Saturday in New York.

Speaking two days after raising the possibility of a hydrogen bomb test in the Pacific Ocean, Ri showered derogatory language on Trump while addressing world leaders, suggesting it was “fair enough” for him to use a tone that corresponded to Trump’s earlier speech to the same global body.

“The absurd reality that someone like Trump, a mentally deranged person full of megalomania and complacency, who is chastised even by Americans as ‘Commander in Grief,’ ‘Lying King’ and ‘President Evil’ is holding the seat of the U.S. president, and the dangerous reality that the gambler who grew old using threats, fraud and all other schemes to acquire a patch of land holds the nuclear button – these constitute the gravest threat to the international peace and security today,” said Ri, according to English transcripts provided by the United Nations.

In his 22-minute speech, given in Korean, Ri mentioned “U.S.” 28 times and “Trump” five times, mostly to chastise Trump’s earlier threat to “totally destroy” North Korea and to rally support from other countries in contending that Pyongyang’s nuclear drive is a “righteous self-defensive measure” against Washington.

North Korea will take “preventive measures by merciless preemptive action” if the United States shows any sign of trying to overthrow or attack the regime, said Ri, but the North does not have “any intention at all to use or threaten to use nuclear weapons against countries that do not join the U.S. military actions against the DPRK.”
DPRK is short for North Korea’s official name, the Democratic People’s Republic of Korea.

Decrying the UN Security Council resolutions as “unjust and unfair,” Ri said it was a “forlorn hope” to think that North Korea would be affected by sanctions. Despite pressure, he added, North Korea’s nuclear development program has developed so much that it is only a “few steps away from the final gate of completion of the state nuclear force.”

Ri continued that North Korea’s ultimate goal is to establish a “balance of power with the U.S.,” and that “the day will certainly come in the near future” when the country settles all damages inflicted on its government and ordinary people.

“Due to his lack of basic common knowledge and proper sentiment,” Ri said in reference to Trump, “he tried to insult the supreme dignity of my country by referring to it as a rocket. By doing so, however, he committed an irreversible mistake of making our rockets’ visit to the entire U.S. mainland all the more inevitable.”

Trump will be held “totally responsible” in case “innocent U.S. lives” are lost as a result of his “suicide mission,” Ri warned.
Ri’s words came shortly after North Korean leader Kim Jong-un issued a personal statement to implement the “highest level of hard-line countermeasure in history” on the United States in retribution for Trump’s UN speech. Kim did not elaborate what countermeasure he had in mind, but Ri, speaking to reporters in New York on Thursday, said it “probably” will be the “most powerful hydrogen bomb” test in the Pacific.

Neither Ri nor Kim gave a timeline, but South Korean government officials and experts are looking to Oct. 10, when North Korea marks the founding anniversary of the ruling Workers’ Party. Pyongyang has a history of celebrating important holidays by showing off its military capabilities.

Over the past few days, North Korea’s state-run media have all taking issue with Trump’s threat to destroy the country.

In one article that ran in the Korean Central News Agency (KCNA) Saturday, Jong Chol-nam, a manager of the East Pyongyang Thermal Power Plant, was quoted as saying, “Old bastard Trump should keep in his mind that the doomsday against him will be sure to come.”

The KCNA said 100,000 angry citizens, which included government officials, other workers and students, packed Kim Il Sung Square in Pyongyang on Saturday to denounce Trump, chanting anti-American slogans and holding signs that read “Resolute revenge” and “Death to imperialist U.S.,” among others.

On Sunday, the KCNA said another rally was held among top government officials in order to “vow to achieve the final victory through all-out change in showdown with the U.S.”

Among several people who participated in the relay speech, Kim Myong-chol, department director of the Presidium of the Supreme People’s Assembly, was mentioned as saying that “all the service personnel and people will become bullets and bombs to bring to an end the century-old confrontation with the U.S. with our exciting victory.”