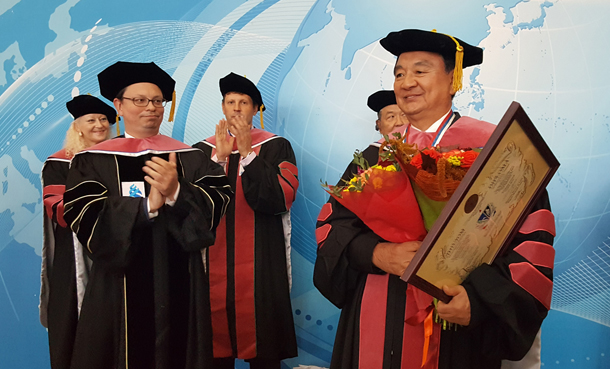 FEFU Interim President Nikita Anisimov presented the degree in a ceremony held at the university’s Sopka Conference Hall in Russky Island, Vladivostok. Anisimov said he was awarding Chairman Hong for “his dedication to promoting peace in Northeast Asia and the Korean Peninsula while transforming the JoongAng Media Network into one of the greatest media companies.”

He added that he was especially impressed with Hong “for creating an international sensation by leading the Peace Odyssey project over 2015 and 2016, during which he explored Chinese and Russian border area with North Korea along with Korean politicians, former government officials, scholars, writers and artists to search for ways towards peace and coexistence.”

“Last year,” Hong said in his acceptance speech, “I traveled with a group of 50 people to places in the Far East such as Kraskino, near North Korea, in an attempt to explore ways to promote peace on the Korean Peninsula.”

He added, “I believe that if South Korea and Russia work together, we would be able to find a way to build peace on the peninsula.”

Hong went on to explain the different steps he believed were needed to be taken in order to resolve the North Korean nuclear problem.

First, he said, Russia should take part in sanctions against North Korea and strengthening its cooperation with Washington.

“As they had done before to resolve the threat of Iran’s nuclear development,” he said, “Russia and the United States could strategically cooperate to address North Korea’s nuclear problem,” adding that he hoped for the “confrontational U.S.-Russian relationship to become one characterized by cooperation.”

Hong added, “If we see progress with North Korea’s nuclear problem, there may be a condition where the currently stagnant partnership between South Korea, North Korea and Russia can be revived.”

He said, “If the cooperation between these three countries gains momentum, there is a greater likelihood that China and Japan, being interested in the development of the Far East, will want to take part as well.”

Hong said the “collaboration of the three countries doesn’t have to end there, but the geopolitical tensions in Northeast Asia could be transformed into a geo-economic partnership,” and that “American participation might become probable once a strong multilateral cooperative structure is established.”

He said he believes that cooperation between North Korea, South Korea and Russia could develop into an important political alliance while leaving a positive impact on the economies of Far East Russia and Northeast Asia.

“As the region comes to coexist and co-prosper,” Hong said, “Russia could play an important role in the Korean Peninsula as it had done during the German reunification with its forward looking policies.”

Not leaving out reunification of the Koreas as an option, Hong continued, “The dynamism of the Koreas’ economic development will expand into Russia’s Far Eastern region and produce a great synergy.”

He concluded by claiming that “this will be 10 times, even 100 times, more powerful than just a simple partnership between South Korea, North Korea and Russia,” suggesting a new term, “the Northeast Economic Miracle,” could soon be in use.

The award ceremony was attended by some 200 people, including the university’s School of Law Director Vladimir Kurilov, law experts on South Korea, Russia, China and Japan, Legislative Assembly Chairman of the maritime territory Primorsky Alexander Rolik and consul general to Vladivostok Lee Seok-bae.

Previously, the FEFU had hosted the third Eastern Economic Forum on Sept. 7, which had been attended by South Korean President Moon Jae-in and Russian President Vladimir Putin.