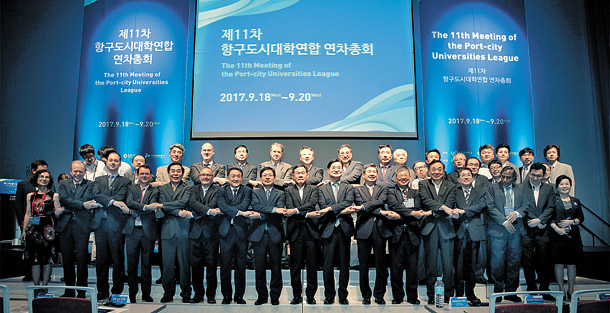 Incheon National University hosted the 11th meeting of the Port-City Universities League from Sept. 18 to 20 at the Songdo Convensia. [INCHEON NATIONAL UNIVERSITY]

From Sept. 18 to 20, Incheon National University hosted the 11th meeting of the Port-City Universities League at the Songdo Convensia. The event was co-hosted by Incheon National University, the Incheon city government and Incheon Port Authority. Symposiums, forums and meetings were held to strengthen the network of universities based in port cities, discuss development strategies and present the vision of Incheon as a port city.

The Port-City Universities League aims to develop a global network among port cities and their universities, and provide a forum to exchange ideas and views about the culture related to ports, including history, trade, industry and maritime research, according to the league’s website.

The theme of this year’s meeting was “Sustainable Port Development and the Role of Port Cities” with a focus on building advanced harbors, strengthening logistics and renewing urban waterfronts. In-depth discussions touched on various issues pertaining to port environments, information technology, tourism and urban planning.

“The Port of Incheon has played its role as the ‘waist’ of the Korean Peninsula, functioning as the logistics hub of Northeast Asia,” said President Cho of Incheon National University. “I hope this meeting will be a stepping stone for the development of ports to which each university belongs.”

In his keynote speech, Nakamura of Yokohama National University presented on a smart traffic system and waterfront city design that Yokohama has been working on for the past 20 years.

Shin, from the Green Technology Center, spoke about the center’s role in combating climate change and recommended cooperation on technology to fight global warming.

Sessions on specialized topics were held from Sept. 18 to 19. On the last day of the conference, Sept. 20, visitors received a tour of the Incheon port, including the Yeonan Pier, Incheon Bridge and Incheon New Port. During the tour, the Incheon Port Authority elaborated on the area’s development and business plans.

“Strong leadership is a necessity to successfully accomplish the projects that our many member universities participate in,” said Choi, president of the league and a professor of civil and environmental engineering at Incheon National University. “Incheon National University is going to actively partake in seeking ways to develop existing ports and pursue the harmonious development of ports and cities.”