For friendlies, Shin recruits from abroad

For friendlies, Shin recruits from abroad 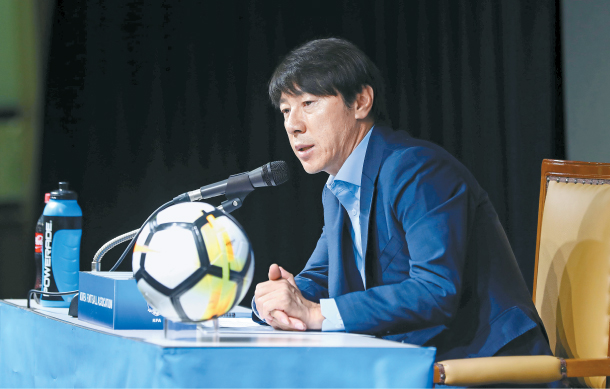 Shin Tae-yong, head coach of the Korean men’s football team, announces the roster for two upcoming friendlies during a press conference at the Korea Football Association House in central Seoul on Monday. [YONHAP]

Shin Tae-yong, head coach of the Korean men’s football team, unveiled his roster for the squad’s two upcoming friendlies against Russia and Morocco on Monday, and for the first time in the team’s history, the 23-man lineup will only include players from foreign leagues, as the Korean league is still wrapping up its regular season.

Defenders Oh Jae-suk, Rim Chang-woo and Yoon Suk-young are returning to the team after a year off, and another defender, Song Ju-hoon, who was unable to compete at the 2016 Rio Olympics due to an injury right before the event, got his name on the roster for the first time.

But the surprise was not who Shin included - it was who he left out. Two young hopefuls who performed above expectations during the U-20 World Cup, Lee Seung-woo and Paik Seung-ho, failed to make the lineup.

“They are still young and have promising football careers ahead of them,” Shin said. “I’ve been checking on them regularly. Whenever there’s a chance, I’ll add them to the roster and have them play for the national team.”

Based on the team’s performance in their qualification matches for the 2018 World Cup, the squad is in desperate need of a striker who can guarantee goals for Korea. In six of their qualifiers this year, Korea has scored only three goals and recorded four scoreless games.

Looking at Shin’s roster, only two players, Hwang Ui-jo and Ji Dong-won, have been strikers throughout their whole career.

Hwang Hee-chan of Red Bull Salzburg was considered Korea’s most promising striker, but due to injury, he is unable to play in the two friendlies.

“We don’t have any big-name strikers,” Shin said. “If we were to continue our team with two top strikers, I feel like we lack players. It is a spot that I still need to consider. In order to play football where we win and get more aggressive in matches, Korean football needs to develop a big-name striker.”

Aside from the roster, Shin’s statements on Monday regarding the possible addition of Guus Hiddink, the former head coach who led Korea to the 2002 World Cup semifinals, received greater attention. When the team finalized its advancement to next year’s World Cup, Hiddink earlier this month expressed interest in helping Korea in any way. Since then, Korean football fans have been pushing for Hiddink’s return.

“If Hiddink is willing to help Korea without any personal greed, I want to accept his offer,” Shin said. “If he gives help, I want to join him and develop Korean football.

“Hiddink is a hero in Korean football, I agree,” he added.

The two are likely to meet in Russia on Oct. 8, when Hiddink is expected to watch Korea’s friendly match.

“I can understand that fans have nostalgia for Hiddink because what happened in 2002 was really a miracle,” Shin said.

“I know that if we don’t perform well in friendly matches, there is going to be a huge backlash, but a coach doesn’t need to be afraid of that and change his philosophy. If we make use of Hiddink’s advice against the Russian team and collect a good result, that will set a good example.”

During the press conference, Shin also showed his intention to recruit another tactician to the coaching staff and presented a road map to the World Cup that will be about 70 to 80 percent complete by March. The World Cup will be taking place in Russia from June to July.

“I’m looking for a trainer that comes with great experience and has name value at the same time,” Shin said, “and we plan to hire another strength and conditioning coach.”