The Korean national women’s volleyball team, ranked 10th in the world, swept Thailand, ranked 16th, to win the AVC Qualifiers at the Nakhon Pathom Gymnasium in Thailand on Sunday. 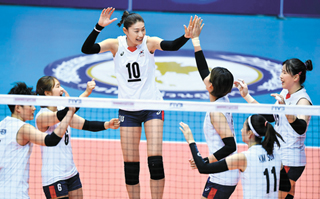 The Korean national team after scoring a point against Thailand at the FIVB Women’s World Championship Japan 2018 AVC Qualifiers at the Nakhon Pathom Gymnasium in Thailand on Sunday. [YONHAP]

A day before Korea’s match against Thailand, the team, led by Hong Sung-jin, has already finalized its advancement to the FIVB Women’s World Championship Japan 2018 by defeating Vietnam - thus ending the tournament with a record of four wins and no loss to get to the world championship for the first time in eight years.

This is also a great redemption for Korea, as they lost 0-3 to Thailand a month ago at the 2017 Asian Women’s Volleyball Championship. Though Korea has a dominant head-to-head record against Thailand, recently, it suffered a three game losing streak.

But now Korea has extended their head-to-head record to 28 wins and eight losses.

During the first set, the two teams went back and forth to be tied at 21-21, but with Lee Jae-yeong’s spike and Kim Hee-jin’s block, Korea took the lead 24-22.

And with another point by Lee, Korea took the first set.

Starting in the second set, Korea took the lead, led by Kim Yeon-koung, to win 25-16. In the third set, Korea quickly got to 20 points first, and with Kim Hee-jin’s spike, concluded the set 24-21 to win the match.

The team has now concluded their crucial schedule for the 2020 Tokyo Olympics. To be assigned to a better seed for Olympic qualification, the team competed in a total of four international events this season.

Despite the lack of support provided to the national team, which had to compete in the FIVB World Grand Prix 2018 in July without a full roster, they still managed to finish runner-up in Group 2.

The national team allowed younger players like Lee and Ha Hye-jin to gain experience, as the team competed without the usual starting players.

Though the team had to endure a tough schedule, at the World Championship qualification, they’ve shown solid teamwork and earned their spot in the championship.

The team will return to Korea today and will start their season with their clubs.