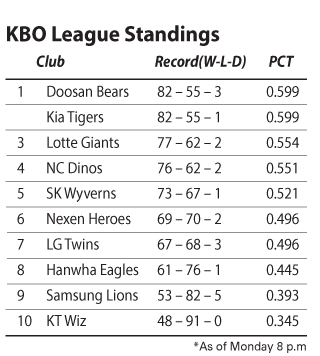 There’s no such thing as impossible in sports, especially in baseball. The Doosan Bears are now tied for the lead with the Kia Tigers in the KBO for the first time in 177 days. If the Bears are still in first place next year when the regular season ends it will be the biggest comeback in KBO history.

By the middle of July it looked like the Bears had no chance of taking home the regular season pennant for the second year in a row, as they were 13 games behind the Tigers. But the Bears slowly began to climb back up the table until, during their game against the KT Wiz on Sunday, the scoreboard announced that the Tigers’ had lost to the Eagles and the Bears had finally made it back to the top of the table.

While the Tigers had a shutout loss against the Eagles, the Bears defeated the Wiz 6-4 at Jamsil Baseball Stadium in southern Seoul to join the Tigers at the top of the table. Now, with four games remaining for the Bears and six for the Tigers, the regular season champion will be determined after the very last game. Based on the number of games remaining the Tigers appear to have a greater chance of taking the title, but in order to make it happen they may have to win all six of their remaining games - depending on the Bears’ last four games.

That said, to guarantee a regular season victory the Tigers have to win all six remaining games. Since the Bears are ahead of the Tigers in their head-to-head record for the season, if the two teams are tied at the end the Bears will automatically win. If so, it’ll be the biggest comeback in the KBO history.

There is more competition between the top four teams in the KBO heading into the final few days. As the Giants won two games against the Eagles on Friday and against the Nexen Heroes on Saturday, they overtook the NC Dinos to take the third spot. 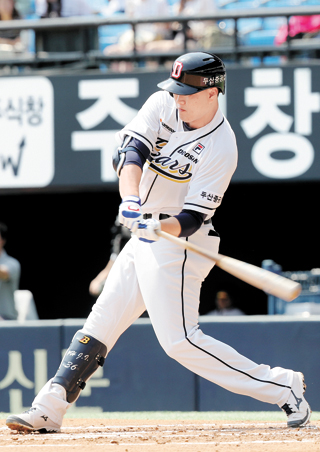 In the last month of the KBO’s regular season, Oh Jae-il of the Doosan Bears has started his home run streak to strengthen the Bears’ batting lineup heading into the postseason.

From the Bears’ game on Sept. 12 to the game on Sunday, Oh has hit a total of eight home runs. Throughout the ten games, Oh has a 0.425 batting average with 20 RBIs and 17 hits. Oh’s record is even more impressive than the statistics suggest, as he hit two home runs in the games against the NC Dinos on Sept. 12, against the SK Wyverns on Sept. 14 and against the Samsung Lions on Sept. 16.

While the Bears were losing 11-13 to the Dinos, Oh hit a three-run home run in the eighth to lead the Bears to a come-from-behind victory. Oh managed to record a total of seven RBIs and by hitting another home run against the Wyverns, Oh managed to exceed 20 home runs for the second consecutive season.

“Rather than just hitting home runs, it feels better if I hit a home run that helps the team’s victory,” Oh said.

Oh continued to impress as he hit two addition home runs last week. His last minute stretch has now allowed him to surpass his record in the 2016, which was his best season. During 2016, Oh had a 0.316 batting average and hit a total of 27 home runs, which was his personal high.

Oh made his KBO debut with the Hyundai Unicorns in 2005, after graduating from Yatap High School, but he only played in one game, where he got struck out by Oh Seung-hwan, now of the St. Louis Cardinals. Oh continued his career at Sangmu Baseball Team in the Futures’ league and, once he completed his military duty, Oh made his return to the KBO, playing for the Nexen Heroes in 2010.

Oh joined the Bears in July 2012, but it wasn’t until last season that he started to find a spot in the lineup.

On Wednesday, the Bears will play against KT Wiz at Suwon Baseball Stadium in Gyeonggi at 6:30 p.m.