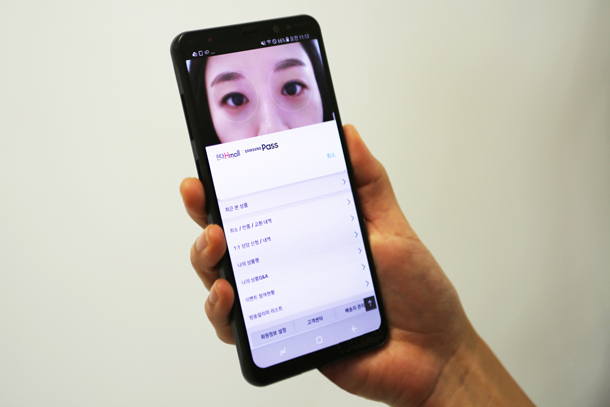 The retail group said on Monday that the app for its high-end shopping website The Hyundai and Hyundai H Mall, another shopping site with a wider range of products, will allow users with smartphones that have an iris scanning feature to log in to the apps just by looking briefly at the camera.

The two shopping sites run both offline and online retailers, and recent analysis of shopping patterns showed that over 70 percent of online revenue came through the mobile apps. New customers signing up to the apps have increased by over 30 percent annually, according to a spokesperson.

“Customers do not have to memorize complicated passwords when it comes to logging into the apps and iris recognition is much more secure than other security tools,” she added.

The iris, a thin ring in the eye that dilates and constricts the pupil to control light intake, is known as one of the most unique and safe biometric identification methods.

The chance of two people having an identical iris is two billion to one, which compares to 10 million to one for fingerprints, the most commonly used biometric identification method.

Comparing with logging in using an ID and password, which takes approximately 20 seconds, logging in with iris recognition requires only 2.3 seconds, almost one 10th of the time.

Currently only the Galaxy S8, S8 Plus and Note8 include the feature, but Hyundai Department Store is considering adding a facial recognition feature to be compatible with the upcoming iPhone X’s FaceID, next year. FaceID is Apple’s answer to iris scanning.

Retailers in Korea have been scrambling to employ cutting-edge security methods lately. Lotte Card in May launched Hand Pay, the first system in the world that can process payments with the scan of one’s palm.

It allows customers to pay with an individual’s distinct vein pattern on the palm as identification.