‘I Can Speak’ debuts at top of weekend box office

‘I Can Speak’ debuts at top of weekend box office 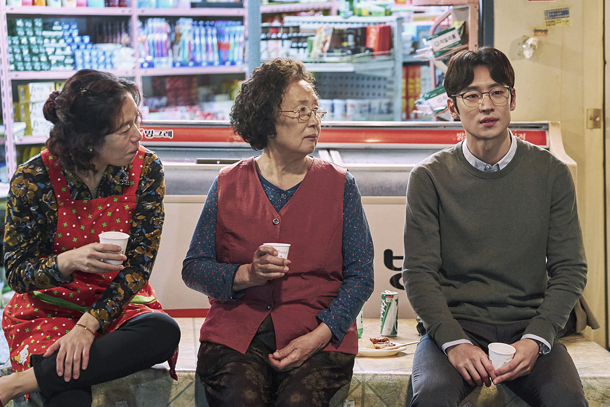 The newly-released comedy drama “I Can Speak” pushed down “Memoir of a Murderer” to claim victory in Korea’s weekend box office while two other new releases - Spanish thriller “The Invisible Guest” and adventure drama “The Lost City of Z” - managed to round out in the top ten, ranking sixth and eighth respectively.

“I Can Speak,” released on Thursday, sold 608,000 tickets from Friday to Sunday at 1,140 screens, adding on to a total of 727,000 admissions sold. The movie accounted for 46 percent of the total weekend ticket sales, which is more than twice that of “Memoir of a Murderer,” which came in at second.

Directed by Kim Hyun-seok, “I Can Speak,” revolves around public official Park Min-jae (Lee Je-hoon) and grumbling grandmother Na Ok-bun (Na Muni), who bothers district office officials everyday with complaints on trivial matters. Though the two do not have a good start, they develop a close relationship when Min-jae begins teaching English to Ok-bun, and learns of Ok-bun’s painful past as a so-called comfort woman and the motivation that drives her to study so hard.

Thanks to its heartwarming tale and generally positive reviews from critics and audience, the film is expected to become one of the most well-received movies for families during the upcoming 10-day Chuseok holiday.

Crime thriller “Memoir of a Murder” came in at second with 215,000 tickets in its third weekend, taking up 16.7 percent of the weekend ticket sales. The film, centering on a retired serial killer who suffers from Alzheimer’s, has sold a total of 2.47 million admissions.

In third place was action-packed, music-filled “Baby Driver.” Starring Ansel Elgort of “The Fault in Our Stars” (2014) as a young genius driver unwillingly involved in crime, the movie sold 154,000 admissions over the three days, adding to a total of 718,000 admissions.

While action comedy “The Hitman’s Bodyguard” came in at fourth on its fourth weekend, crime action “American Made,” starring Tom Cruise, rounded out the top five on its second weekend.

Whether “I Can Speak” will be able to hold on to the top spot next weekend remains unclear with the release of “Kingsman: The Golden Circle” on Wednesday.