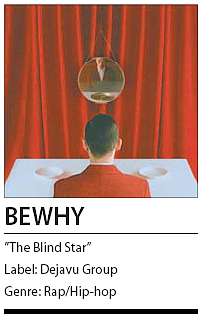 Rapper BewhY has been stirring his fan’s interests with his recently released singles “Scar,” “HEWGESO” and “Dejavu.” He is back again with the full album “The Blind Star,” which was released on September 17.

The album consists of 11 tracks, and he has worked with a number of producers and artists such as Gray, Dok2, Gaeko, Cjamm and more.

The title song “My Star” is for all who are exhausted from the lives they lead. Unlike the grand opening using an assortment of brass instruments and a snare drum, the main melodies and the verses are mellow, consoling listeners to shake off the standards and expectations given by society and sharing the message that just being yourself is what makes that person special.

The rest of the album’s songs cover topics from the singer’s faith, his success, and his position in society. His music video for “9UCCI BANK” leaves a distinct impression to viewers, as the rapper appears completely adorned in his favorite design brand Gucci.