Widow of singer Kim Kwang-seok to be summoned

Widow of singer Kim Kwang-seok to be summoned 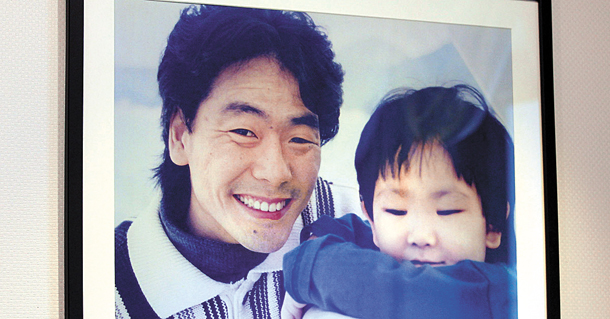 A framed photo of legendary folk singer Kim Kwang-seok and his daughter hangs at a memorial hall dedicated to him in Daegu, his hometown. More than two decades after he died of suspected suicide in 1996, prosecutors are now investigating how his daughter died 10 years ago, and why Kim’s wife kept it in the dark for so long. [GONG JEONG-SIK]

Korea’s police chief said Monday that the widow of the legendary folk singer, Kim Kwang-seok, who wrote the revolutionary ballad “Ireona,” will soon be summoned to answer questions about their daughter’s death, reopening a case from 10 years ago after a local movie director accused her of killing the daughter to claim Kim’s copyrights.

Lee Chul-sung, commissioner general of the Korean National Police Agency, said during a press briefing that the agency would work out a schedule with Seoh Hai-soon, who‘s been banned from leaving the country since last Friday. Seoul prosecutors announced earlier the same day they would investigate how Seoh’s daughter died in 2007, and why the mother had kept it a secret for so long.

Lee Sang-ho, a journalist for the online media outlet GObalnews, who has been following the singer’s death for years, asked the prosecution last Thursday to look into the case in a formal complaint, saying Kim’s surviving family members had given him their blessing.

A former reporter at local broadcaster MBC, Lee is among several critics in Korea who doubt the singer committed suicide in 1996 at age 31, a conclusion drawn by police at that time. The reporter released a documentary on Kim last month, “Suicide Made,” and has since been claiming that the late singer could have been murdered by his own wife and brother-in-law.

On Sept. 19, Lee sent the local music industry into shock when he reported that the couple’s daughter died 10 years ago, citing police officers in Yongin, Gyeonggi, who confirmed the news and said she died of acute suppurative pneumonia, a type of lung disease. Police said they were unaware she was the daughter of Kim.

Seoh, who is known to run a small talent agency in Korea, had never announced her daughter’s death. That includes the year 2008, when the Supreme Court ruled Seoh and her daughter had ownership over the late singer’s copyrights, giving them the upper hand over Kim’s other family members.

Seoh at that time told the court that her daughter was struggling with a developmental disorder, and therefore asked for ownership over her royalty fees as well. The entire sum has since been forwarded to Seoh.

While breaking the news of the daughter’s death last week, Lee cited Seoh’s acquaintances as being told by Seoh that the child was living in the United States.

In an interview with Yonhap last Friday, Seoh said she was “preparing for legal action” and that she would soon report her case to the National Human Rights Commission.

“I’ve been investigated several times in regard to Kim Kwang-seok, and now that they have doubts about Seo-yeon [the daughter’s name], I’m willing to cooperate with the latest probe as well,” Seoh told Yonhap, adding she kept her daughter’s death a secret from Kim’s family because they “never checked in on her” when she was alive.