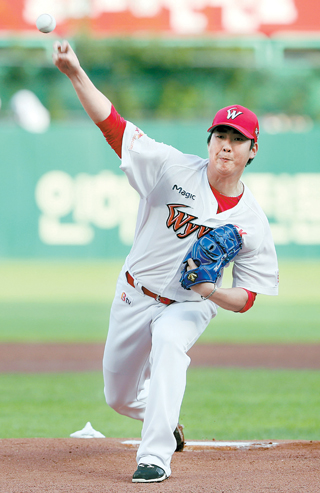 Prior to the start of the season, the SK Wyverns’ new manager Trey Hillman unexpectedly added Moon Seung-won to the team’s pitching rotation, putting him as fourth pitcher. 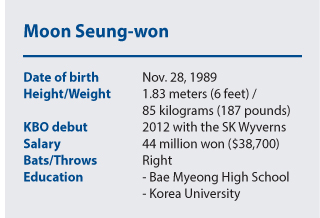 With Kim Kwang-hyun out for elbow surgery, the question of who would fill the fourth pitcher slot became a major concern. Led by Scott Diamond, the Wyverns assigned Merrill Kelly and Yoon Hi-sang to round out the first three positions. After much consideration, Hillman assigned Moon as the fourth pitcher to complete the squad’s rotation.

Moon was as surprised to be included as anyone else. He had never been added to the full-time starting roster since his KBO debut in 2012, and he had failed to impress at the spring training camp in Japan.

“In one of the practice games, I gave up four home runs in addition to the [other] runs I gave up,” Moon said. “And the same continued in the exhibition games.”

Right when Moon started doubting that he would have a chance to be a starting pitcher for the Wyverns, he received Hillman’s call.

“I didn’t want to lose that chance,” Moon said. “I was anxious, but the manager told me that it is up to me to stay in the rotation. And when I picked up my first win of the season, I started to believe that I can play full-time this season.”

Though Hillman showed trust in Moon’s ability as a pitcher who can throw strikes and has great control, Moon’s season concluded earlier than others, getting excluded from the Wyverns’ roster on Sept. 18. Since the Wyverns were planning to conclude their season with a three-pitcher rotation, there was no need for Moon to remain in the Wyverns’ entry. That said, in Moon’s first season playing full-time he picked up six wins and 12 losses with a 5.33 ERA in 18 games.

Though Moon’s ERA was high, he pitched more than 150 innings for the first time since his debut, and on June 20, during the Wyverns’ game against the NC Dinos, he had his first complete game, leading the Wyverns to a 7-1 victory.

“There’s a lot of regrets [looking back at the season],” Moon said. “But I improved compared to last year. Now, I think I know which area I need to work on. Since the season is not over yet, if the Wyverns advance to the postseason, I’m thinking about how to pitch.”

Looking at the 18 games, Moon was more unlucky than bad. In 16 of the games, Moon pitched at least six innings and recorded 12 quality starts - good enough to be second among the Wyverns’ pitchers. Despite the number of quality starts, Moon was only able to convert six of them into wins.

“Of all the games I started in, I’ve pitched more than six innings in more than half of the games,” Moon said. “Last year, the most innings I pitched for was about 5 1/3 innings. From this, I gained confidence on the mound that I can also do it.”

“Through the losses, I learned that I need to stay calm and be cold-hearted,” Moon said. “During the games, I need to keep on throwing strikes.”

Moon said he struggled more mentally than physically with the pressure of joining the full-time roster.

“After a good game, I felt a lot more comfortable preparing for the next game but when I struggled in more than two games, it was difficult,” Moon said.

Out of a perfect score of 100, Moon said he would give himself a score of 80, but only a 40 for his contribution to the team, for being inconsistent.

Starting next season, the Wyverns’ pitching rotation is expected to be a lot more competitive, as Kim will be returning to the team after his surgery. As a result, it is uncertain whether Moon will keep his spot on the Wyverns’ roster for the following season, but he said the 2017 season has allowed him to boost his confidence and gain experience.

“Of course I feel the sense of crisis,” Moon said. “If I don’t [feel that], then I’m probably not thinking. But I feel a lot more confident for the competition next year.”