The truth about Reagan

The truth about Reagan 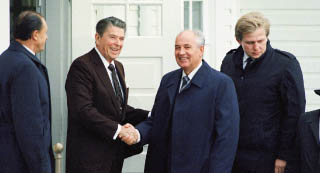 President Ronald Reagan, left, shakes hands with Soviet leader Mikhail Gorbachev in Reykjavik, Iceland, in October 1986. In a 1983 speech, Reagan labeled the Soviet Union an “evil empire” and called for a strategy that would “write the final pages of the history of the Soviet Union.” [AP/YONHAP]

In his keynote speech to the UN General Assembly, South Korean President Moon Jae-in invoked Ronald Reagan’s Eureka College commencement address in May 1982, in which he said, “Peace is not absence of conflict, it is the ability to handle conflict by peaceful means.” President Moon referred to Cold War-era wisdom to underscore the importance of stable management of the North Korean nuclear crisis.

In history, however, Reagan was responsible for the collapse of the Soviet Union rather than handling it stably. Two months before the Eureka speech, Reagan approved a covert operation to support anti-Soviet resistance among religious and civic groups in Poland. A few months after the speech, he kicked off sanctions against the Soviet Union, banning the export of gas pipe parts produced in West Germany to the Soviet Union.

Reagan also signed an executive order in January 1983 objecting to coexistence with the Soviets. In March, he called the Soviet Union an “evil empire” in a speech to the National Association of Evangelicals. He called for a rollback strategy that would “write the final pages of the history of the Soviet Union.”

It was at that time when major American cities became the target of Soviet threats. Reagan defined the communist system as an evil empire that denied civil liberties, infringed on human rights and trampled on the sovereignty of its neighbors. He used nearly all the resources available to him to bring down the evil empire. His national security adviser drafted the Strategic Defense Initiative to shoot down nuclear-tipped missiles in space. It reflected the president’s will not to compromise with the Soviets’ nuclear threat. Reagan stressed that a nuclear freeze was “a very dangerous fraud” and argued that “we must find peace through strength.” Instead of negotiating over nuclear threats, he wanted to talk based on pre-emptive retaliation capability.

The Strategic Defense Initiative was aimed at exhausting the Soviet economy by encouraging Moscow to engage in a consuming arms race. It was a creative strategy to bring down both the military and economy. CIA Director Bill Casey traveled around the world to convince countries to stop dollars from flowing into the Soviet Union. In exchange for providing the high-tech weapons that allowed Saudi Arabia to become a Middle Eastern hegemon, Saudi Arabia started to lower international oil prices. It was a maneuver to break the Soviet economy that relied on oil exports for most of its dollar income.

Reagan’s declaration to bring down the Soviet dictatorship and thorough policy execution left the Communist Party and military leaders shivering. They were intimidated. In the end, Eastern Europe was liberated in 1989, and the Soviet Union was dissolved in 1991. Reagan’s “collapse of the Soviet Union,” “evil communism,” “fraud of nuclear freeze” and “peace through strength” were not just theories but proven historical facts.

President Moon unexpectedly cited Reagan in his UN speech. Not many of his supporters seem to be fond of Reagan. But when the Blue House borrowed from his speech, the staff very well understood the historical significance. Reagan was a leader who disabled the nuclear aggression of a communist dictatorship that violated human rights. He is a figure worth studying as we grapple with Kim Jong-un, who pretends to be a ruler with nuclear weapons.

Some may have the fairy tale idea that a South Korea without nuclear weapons can peacefully coexist with a nuclear-armed North Korea as long as the United States does not cause trouble. I hope Moon’s Blue House aides truly understand the value of Reagan.