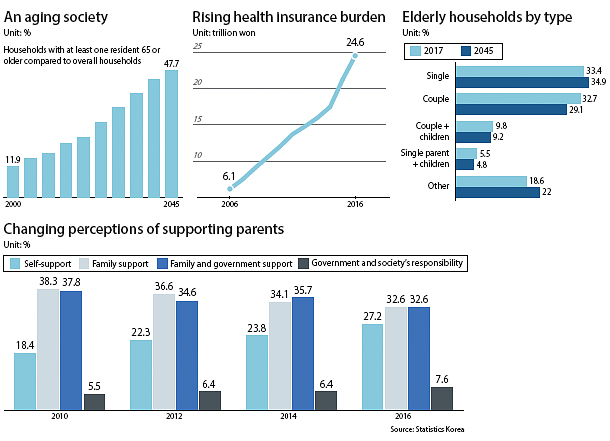 As the population continues aging rapidly, experts predict that by 2045 nearly half of all households in Korea will be home to people over the age of 65.

But more concerning is the growing number of older people that live alone or support themselves rather than relying on their children or the government.

According to Statistics Korea on Tuesday, households of people over the age of 65 will account for 47.7 percent of all households, or 10,653 units, by 2045. This will be a sharp increase from the current 20.5 percent.

Older people living alone will account for 34.9 percent, or 3.71 million households, by 2045. Currently they account for 33.4 percent.

The study shows that medical costs will be on the rise as well. Just 10 years ago the overall medical bill amounted to 32 trillion won ($28.16 billion). As of the end of last year that has doubled to 64.7 trillion won. This was largely because of the rising medical bills of older people.

Older people that are living alone are more vulnerable as they are generally less prepared for the costs of retirement.

Only 32.5 percent of older people living alone said they were prepared for retirement, which is 14.4 percentage points lower than the average.

The biggest retirement plan that they are relying on is the national pension at 34.3 percent, followed by bank deposits and savings at 24.3 percent.

The study also revealed that a larger number of older people are now economically independent.

According to the study, 41.6 percent of people over the age of 65 said they were supporting themselves. This is an increase from 36.3 percent in 2013. On the contrary, reliance on children or relatives has dropped during the same period from 42.3 percent to 31.8 percent.

Opinions of economic independence and relying on family members have also been changing. In 2014, 23.8 percent thought they should be self-supporting. Two years later that figure has increased to 27.2 percent.

As a result, more older people are looking for jobs. Last year 442,800 older people living alone had a job, a 3 percent increase on the previous year. Older single women, in particular, were more likely to have found employment than their male counterparts. In 2016, 73.1 percent of women over the age of 65 had a job, almost triple the 26.9 percent of single older men.