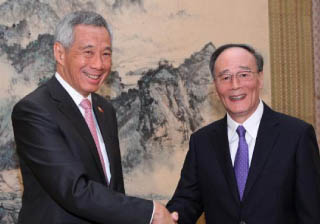 Singapore is a small country, just 1.2 times the size of Seoul. But it is a diplomatic power that keeps a balance between the United States and China, China and Taiwan and South and North Korea. Founding Prime Minister Lee Kuan Yew kept an equal distance in his inter-strait dealings, and Singapore made diplomatic ties with China in 1990.

Lee Kuan Yew visited Taiwan in 1973. Then-Premier of Taiwan Chiang Ching-kuo said they could communicate without an interpreter and so could share thoughts easily. He proposed that they exchange letters and maintain their friendship. In 1975, the two leaders agreed to Project Starlight, whereby Taiwan provided Singapore with a military training facility.

Then the situation turned around drastically. Lee made an official visit to China and was accompanied by his foreign minister, defense minister and a likely successor. China offered hospitality and arranged meetings with President Xi Jinping, Premier Li Keqiang, Standing Committee Chairman Zhang Dejiang and Communist Party leader Wang Qishan, the top three and sixth most powerful men in China.

Xi said the contact was a good tradition for the leaders of future generations and should be reinforced. Lee said that he supports the One China policy and opposes the independence of Taiwan.
Lee’s China visit was full of political signals.

As Xi is getting ready for the 19th party Congress, while Lee is in a family feud, their political interests have coincided. After Lee asked for a meeting with Wang Qishan, also the Secretary of the Central Commission for Discipline Inspection, the Foreign Affairs Leading Group arranged the meeting.

The meeting took place at Zhongnanhai’s Hall of Purple Light, a reception hall for the premier. Wang said that it was unexpected and that he was pleased. Singapore, which made ties with both South and North Korea in 1975, exchanged plans to deal with the North Korean nuclear crisis. Lee visited Xiamen, Fujian, Xi’s political base, before returning to Singapore. Then Taiwanese media disclosed the postponement of the Starlight program. Taiwan’s defense ministry refused to comment. Beijing and Singapore’s defense authorities did not release official responses.

President Moon Jae-in’s visit to China is still not decided as anti-Chinese sentiment is spreading in Korea. After Lotte Group decided to withdraw its Chinese operation, people praised the decision without thinking ahead. Of course, armored vehicles and radars are very different matters. But Singapore’s diplomacy with China is noteworthy.