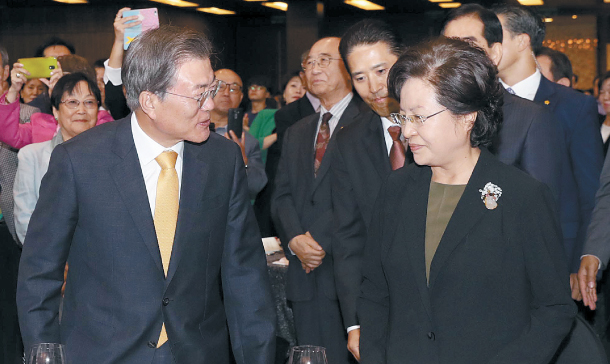 President Moon Jae-in, left, exchanges pleasantries with Kwon Yang-sook, widow of the late President Roh Moo-hyun, at a ceremony held at the 63 Convention Center in Yeouido, western Seoul, on Tuesday, to mark the 10th anniversary of the inter-Korean summit between President Roh and North Korean leader Kim Jong-il in 2007. [YONHAP]

President Moon Jae-in urged Pyongyang Tuesday to accept his earlier proposals for military talks and family reunions at an event to mark the 10th anniversary of the 2007 inter-Korean summit. He also said the door for dialogue is still open if the regime gives up its nuclear and missile programs.

The government hosted an event to mark the 10th anniversary of the inter-Korean summit between then-President Roh Moo-hyun and then-North Korean leader Kim Jong-il and an agreement adopted by the two leaders. It was the first time that the government hosted the ceremony.

The Ministry of Unification jointly organized the event with the Roh Moo-hyun Foundation and the Seoul Metropolitan Government at the 63 Convention Center. Over the past nine years of the conservative administrations of Lee Myung-bak and Park Geun-hye, the anniversary event was hosted solely by the foundation remembering the late Roh.

Roh traveled to Pyongyang on Oct. 2, 2007, for an inter-Korean summit. The Declaration on the Advancement of South-North Korean Relations, Peace and Prosperity was adopted on Oct. 4 after the Roh-Kim meetings. Moon was Roh’s chief of staff at the time. He was also the head of the summit preparation committee.

“Many of the agreements in the Oct. 4 Joint Declaration can still be implemented,” Moon said in the speech. “Restoring the military dialogue, in particular, must be implemented urgently to ease tensions between the two Koreas.”

Moon also said the agreement to improve humanitarian cooperation, particularly holding separated family reunions, must also be implemented as soon as possible. In his speech, Moon said the safety of the people and peaceful management of the situation are the top priority, vowing that the South will not tolerate a nuclear-armed North. “The government will secure military deterrence power while cooperating with the international community to avoid unnecessary escalation of tensions and possible military conflicts,” he said.

“For North Korea, the window of opportunity is still open. As I have said many times, the table for dialogue and negotiation is available if the North chooses to stop reckless choices,” Moon said. “We will help the North’s development with the international community, in return for the North’s abandoning of nuclear programs.”

Moon, a liberal president who took office in May, has long expressed his respect for existing agreements between the two Koreas, particularly the joint declarations adopted after the 2000 and 2007 summits. Moon stressed that the 2007 joint declaration upheld the spirits of reconciliation and efforts of past South Korean leaders, starting with the July 4 South-North Joint Communique adopted in 1972 during the Park Chung Hee administration.

Moon blamed the conservative Lee and Park administrations for the current security crisis. The reconciliatory efforts of past leaders became useless and inter-Korean relations were totally severed in the past decade while the North advanced its nuclear and missile technologies to threaten the world, Moon said. “It is lamentable to think about the enormous cost we are paying now for it,” Moon said.