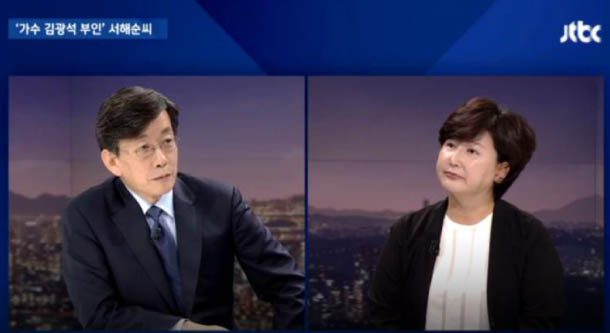 Appearing on JTBC News Monday night, Seo Hae-soon, right, the wife of Korea’s iconic folk legend, Kim Kwang-seok, pleaded innocence in the death of their daughter in 2007, claiming she had kept it a secret for so long because she “lost track of things and was confused.” [YONHAP]

The brother of Korea’s iconic folk legend, Kim Kwang-seok, will be questioned today by police, the first to be summoned in the enigmatic death of Kim’s daughter in 2007.

Seoul police said Tuesday that Kim’s brother, who formally asked the prosecution last Thursday to investigate why Kim’s wife had kept her daughter’s death a secret for a decade, will be followed by a “wide range of witnesses” this week for questioning.

That includes fire fighters on the ambulance that arrived at the scene of her death and hospital staff members, police said. Kim’s wife will likely be summoned towards the end of the investigation after officers gather enough evidence from others.

Kim’s brother had told prosecutors that the wife, Seoh Hai-soon, 52, might have ignored her daughter’s lung disease, causing her to die at age 16 in order to claim Kim’s copyrights.

The daughter’s death was revealed only last week, when a journalist for the online media outlet GObalnews, who has been following the singer’s death for years, reported that the couple’s child died 10 years ago. Police officers in Yonggin, Gyeonggi, confirmed the news when the reporter, Lee Sang-ho, asked for the daughter’s whereabouts. Police said doctors at that time concluded she died of acute suppurative pneumonia, a type of lung disease.

Police contended they were unaware she was the daughter of Kim, a legendary singer in Korea who died in 1996 at age 31 of suspected suicide. Lee is among several local critics who doubt Kim killed himself, suggesting Seoh and her brother might have murdered him to gain ownership of his copyrights.

In her first televised interview with local media since the case began to attract media attention, Seoh told cable channel JTBC on Monday that she hadn’t intended to keep her daughter’s death in the dark for so long, claiming she “lost track of things and was confused.” On why she did not tell Kim’s other family members about her daughter’s death, Seoh said she grew apart from them during the trial, and that they never asked about the child over the past years.

After Kim died, Seoh and Kim’s other family members originally agreed that Kim’s father would own the singer’s copyrights until he dies, and that the licenses will be handed over to Kim’s daughter afterwards.

But when Kim’s father died in 2004, Kim’s mother and older brother asked that they take the copyrights, eventually going to court with Seoh.

In 2008, the Supreme Court ruled that the daughter had ownership. But it was a year after she died. Even then, Seoh had kept it a secret from the court and asked the authority to give the rights to her, saying the child was struggling with a developmental disorder.

“Why would I have lied about Seo-yeon [the daughter’s name] when her inheritance would automatically be forwarded to me?” Seoh said on JTBC, adding, “I had no idea I needed to tell the court.”

In a radio interview with CBS on Tuesday, Kim’s brother said he was “speechless” about Seoh’s interview, and that he couldn’t understand how Seoh could have “lost track of things for the past 10 years.”