Business is risky for young entrepreneurs

Business is risky for young entrepreneurs 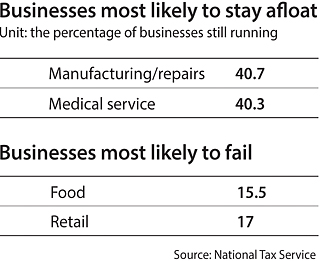 Choi Jin-ho, 32, opened a pub near Seoul Station earlier this month. It’s called the Black Whale and serves pizza, nachos and a wide variety of imported beers. For Choi, it was a dream come true.

“I will never forget the excitement I felt on opening day,” Choi says.

But dream has turned to reality in the weeks since, and Choi is now wondering whether he made a mistake investing nearly 30 million won ($35,114) in the pub.

“There were a number of days during which I didn’t have a single customer for hours,” he says. “On such days, I get overwhelmed by concerns over whether I can survive in this market.”

Choi’s anxiety is not unfounded, as data released by the National Tax Service Wednesday suggests. Fewer than two out of 10 restaurant businesses founded by young entrepreneurs continue to be in business five years after their debuts. The tax service defines young entrepreneurs as people between the ages of 15 and 34.

According to the service, 43,322 food businesses were launched by young entrepreneurs in 2011. Five years later, only 6,705 survived, a meager 15.5 percent survival rate, the lowest rate among businesses begun by young people.

On the flip side, the kind of business most likely to stay afloat after its first five years is manufacturing, which includes such services as car repair and molding shops. Their survival rate was 40.7 percent, more than twice the rate of food and retail shops.

The second business sector most likely to survive is medical clinics, which includes dental and oriental medicine clinics. They have a 40.3 percent survival rate.

Cho Young-tak, an NTS official involved in the study, said one of the reasons the government released the data Wednesday was to encourage young people to “open up skill-oriented businesses” such as in manufacturing or medicine.

“We wanted to give encouragement to young people seeking to open businesses in skill-valued sectors,” the official told the Korea JoongAng Daily.

While restaurants were singled out as the most likely business to flounder, many young people try that kind of business, the data shows. The number of coffee shops opened by young men and women skyrocketed over a five year period, from 1,525 in 2011 to 4,587 last year, a 200.8 percent increase.