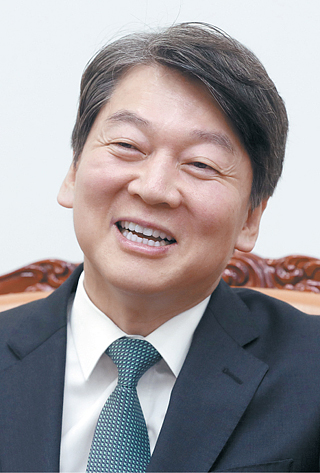 For the first time in a long time, the opposition People’s Party has made its presence felt. The Blue House and the ruling Democratic Party have been wooing it day and night ever since the People’s Party cemented its role as the “casting voter” in the confirmation hearings of nominees Kim Yi-su as Constitutional Court chief justice and Kim Meong-su as Supreme Court chief justice. President Moon Jae-in was even willing to personally make phone calls requesting cooperation. Chairman Ahn Cheol-soo, who was behind the People’s Party’s rise to prominence and its emergence as the “clear-cut” opposition party, sat down for an interview with the JoongAng Ilbo following Kim Meong-su’s nomination approval on Sep. 21. Ahn, a software mogul-turned-politician, finished in third place in the 19th presidential election last May before being elected as the People’s Party head late August.

Q. What are your thoughts on the approval of Kim Meong-su’s nomination as the new Supreme Court chief justice?

Before the confirmation hearing took place, you requested everyone to “carefully judge Kim on his ability to uphold the independence of the judiciary.” Weren’t you implying opposition?

No. I was simply asking lawmakers to apply high standards to assess Kim since maintaining the judiciary’s independence is important.

Why do you think the motion to confirm Kim Yi-su’s nomination was rejected while Kim Meong-su’s was passed?

Even if Kim Yi-su became the chief justice of the Constitutional Court, he could only serve one year in the position since his six-year term as a Constitutional Court justice is ending next year. Kim Yi-su couldn’t get widespread support because there were other justices who wanted the job for themselves. Kim Meong-su did not face such problems.

Do you think future confirmation hearings will continue to be affected by party platforms?

The National Assembly still has many vacancies to fill, including the positions of Constitutional Court chief justice and the Board of Audit and Inspection chairman. It is useless to promote party politics when voting to approve nominations since this is done through secret ballots. Our party endorses conscience voting. The fact that we maintain a secret ballot system demonstrates our respect for each member’s decision. The ruling party head should not regard this lightly. The current administration will have a hard time persuading us to support unqualified nominees regardless of the circumstances. If it wants to govern, it should do a good job at it. The Blue House should not vehemently attack opposition parties and the ruling party should not insult the National Assembly, which was exactly what happened in the aftermath of Kim Yi-su’s nomination rejection.

Critics have pointed to your anti-political inclinations as a reason for your failed presidential bid. Do you think you are communicating well with your party members now?

I am talking very intimately with our party floor leader Kim Dong-cheol and other party members. You can tell that everything’s running smoothly from the fact that we haven’t had any conflicts for the first month I’ve been appointed as the party head.

There is a rumor that on the day before the confirmation hearing, you requested party members close to you to reject Kim Yi-su’s nomination approval. Is that true?

What I did was to describe my standards for assessment whenever someone asked my opinion. I evaluated the nominee especially on his ability to maintain independence of the judiciary. But I have never explicitly told anyone to reject the confirmation.

People are saying that the People’s Party began demonstrating its potential as the “casting voter” ever since you’ve become the party head. What do you think?

I feel a great deal of responsibility. Even the most kind-hearted people can become monsters when they enter politics. It’s actually a structural problem. The main culprit is the vested interests of the two-party system. My political goal was to create a multi-party system, and after five years of hard work, I was able to introduce a strong third party alternative.

Why doesn’t the People’s Party raise its voice even though our national security is in a critical state?

Our party supports two approaches. One is to recover our relationship with Washington through strong U.S.-South Korea relations, and the other is to strengthen international sanctions and force North Korea to come out to the negotiating table. I also believe we should simultaneously strengthen our national security.

What is your stance on tactical nuclear weapons redeployment and nuclear armament?

It is necessary for us to examine all possible options. That is all. It’s inappropriate for an opposition party to make specific suggestions regarding tactical nuclear weapons.

How do you respond to the criticism that you and your party members frequently disagree? Party member Rep. Kim Kyung-jin, for example, complained that it’s not right to be on such opposing terms with the Blue House.

I believe that it is good for us to be at odds with the Blue House for the sake of South Korean politics. But we have to make sure that we are not going against it to promote our own political platform, but rather to improve our country’s future.