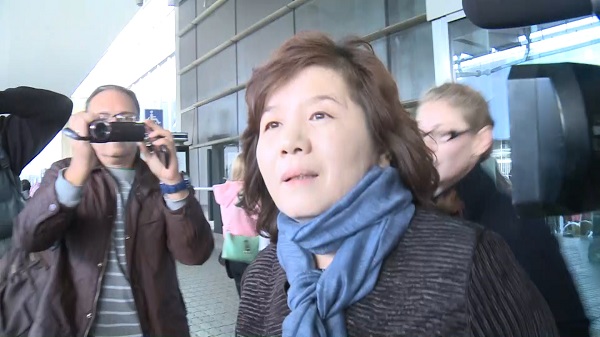 A senior North Korean diplomat who oversees American affairs arrived in Moscow Tuesday, in what appears to be the regime’s effort to find an exit from intensifying global isolation after carrying out a sixth nuclear experiment earlier this month.

Choe herself served as an aide and interpreter at the six-party talks on North Korean denuclearization, which involved Pyongyang, Seoul, Washington, Beijing, Tokyo and Moscow, before that diplomatic endeavor ended in 2008 when North Korea walked out.

Citing unidentified U.S. officials, the Washington Post reported last week that Russia invited Choe to “feel out Pyongyang as to a possible resumption of dialogue between the United States and North Korea.”

Russia might be trying to get involved in back-channel diplomacy between Pyongyang and Washington, the sources said. A senior official from South Korea’s Unification Ministry, which handles inter-Korean relations, admitted that Pyongyang was seeking stronger ties with

Moscow, but said the government hadn’t detected any signs yet that the ultimate goal was to reach out to Washington.
Prof. Yang Moo-jin of the University of North Korean Studies in Seoul believes Russian President Vladimir Putin could be an apt intermediary between North Korean leader Kim Jong-un and U.S. President Donald Trump.

“There needs to be a mediator between both sides in order to prevent conflict. President Putin could be that person because he’s befriended President Trump,” said Yang. “On Russia’s part, it wants to expand its clout in the Korean Peninsula, so North Korea would be aware it can make a middle man out of Putin.”

North Korea’s growing interactions with Russia include a visit from Burmistrov to the North from July 22 to 25, which according to KCNA, was intended to discuss Korean Peninsula issues.

The North sent a delegation to Russia’s Eastern Economic Forum, held from Sept. 6 to 7 in Vladivostok, and diplomats at the Russian Embassy in Pyongyang held a ceremony to celebrate the 15th anniversary of former North Korean leader Kim Jong-il’s visit to Russia.

Choe’s visit comes as North Korea, often called the most closed nation in the world, has grown even more isolated after carrying out its sixth and most powerful nuclear test on Sept. 3.

Kuwait, Mexico, Peru, Spain, Bulgaria, France and Germany either kicked out their North Korean ambassadors or forced delegations to downsize, while Kuwait and Qatar stopped issuing visas to North Korean laborers. The Philippines and Taiwan cut off trade with the North.

Pyongyang is leaning on Moscow as its “blood tie” with Beijing has weakened, especially after China decided to suspend all coal imports from the North in February. China also recently gave a green light to a package of sanctions in the United Nations Security Council that bans over 90 percent of the country’s exports.

North Korea condemned China’s passing of the sanctions through its state media, and on Saturday, specifically slammed the People’s Daily and Global Times for “seriously hurting the line and social system of the DPRK,” using the acronym of its official name, the Democratic People’s Republic of Korea.