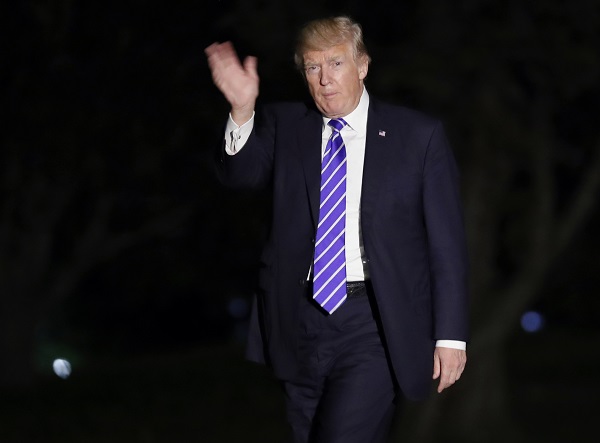 U.S. President Donald Trump waves after stepping off Marine One as he returns to the White House, Tuesday, in Washington. Trump was returning from New York. [AP/YONHAP]

The U.S. Department of the Treasury on Tuesday sanctioned eight North Korean banks and 26 North Korean nationals who act as representatives for the country’s banks in its latest move to cut off financing for the regime’s weapons of mass destruction program.

“We are targeting North Korean banks and financial facilitators acting as representatives for North Korean banks across the globe,” said U.S. Treasury Secretary Steven Mnuchin in a statement. “This further advances our strategy to fully isolate North Korea in order to achieve our broader objectives of a peaceful and denuclearized Korean Peninsula.”

Of the 26 newly blacklisted individuals, seven are representatives of the Foreign Trade Bank, the North’s primary foreign exchange bank, operating in the Chinese cities of Shenyang, Zhuhuai and Beijing, as well as Libya. Three individuals work in Russia, two in Libya, two in the UAE, and the rest in China.

The Treasury’s latest action is also consistent with UN Security Council sanctions measures and follows the council’s unanimous adoption of UNSC Resolution 2375, which put caps on exports of crude oil and refined petroleum products to the country on Sept. 11.
On Sept. 21, Trump signed an executive order authorizing the Treasury to suspend U.S. correspondent account access to any foreign bank that “knowingly conducts or facilitates significant transactions” linked to trade with North Korea or designated individuals.

These sanctions, according to the Treasury, put foreign financial institutions on notice that “they can choose to do business with the United States or with North Korea, but not both.”

The measures essentially function as secondary sanctions that target entities or individuals, including Chinese, with links to North Korea’s illegal activities by cutting them off from the U.S. market and financial systems.

On the same day, China’s central bank issued an advisory to Chinese banks to stop providing financial services to new North Korean customers and to wind down existing loans.

Trump lauded China’s attempts to place restrictions on its banking relationship with North Korea during a joint news conference with Spain’s Prime Minister Mariano Rajoy in Washington Tuesday as he emphasized the importance of isolating the regime.

“I have recently issued tough new sanctions against those who do business with this outlaw regime, and I applaud China’s latest action to restrict its trade with North Korea,” Trump said at the White House Rose Garden. “In particular, I applaud China for breaking all banking relationships with North Korea--something that people would have thought unthinkable even two months ago.”

He went onto thank Chinese President Xi Jinping, while he called for the North Korean “regime’s complete denuclearization.”
However, Trump again emphasized that Washington is ready for a war with North Korea, adding that it would be “devastating” for North Korea.

When asked by a reporter to respond to North Korean Foreign Minister Ri Yong-ho’s remark that Washington has effectively declared war on Pyongyang and threatened to shoot down U.S. aircraft flying off its coastline, Trump replied, “We're totally prepared for the second option; not a preferred option.”

He added, “But if we take that option, it will be devastating – I can tell you that – devastating for North Korea. That's called the military option. If we have to take it, we will.”

Trump went onto say that North Korean leader Kim Jong-un is “acting very badly,” adding, “And we're replying to those things … It's not an original statement; it's a reply.”

His remark indicates a shift in tone compared to last week, when he threatened to “totally destroy” North Korea if it continues its provocations during an address to the UN General Assembly, leading to a war-of-words between Trump and North Korean leader Kim Jong-un.

The South Korean Ministry of Foreign Affairs on Wednesday noted in a statement, “The latest U.S. measure will contribute to efforts between South Korea and the United States, as well as the international community, to induce North Korea to a path of denuclearization through strong sanctions and pressures.”

It added, “We look forward to this latest measure bringing to light the risks of transacting with North Korea and inspiring caution to third-country entities and individuals doing business with the North, and contributing to the strengthening of the faithful implementation of UN Security Council resolutions.”

The ministry noted that since the Trump administration took office, it has designated on its blacklist 33 entities and 48 individuals over five occasions between March 31 and Tuesday.

South Korea Minister of Foreign Affairs Kang Kyung-wha, who is visiting Washington following the UN General Assembly last week, on Tuesday met with U.S. lawmakers and emphasized the importance of U.S.-South Korea coordination in order to ease tensions on the peninsula.

In the meeting with Democratic Rep. Nancy Pelosi of California, the House Minority leader, Republican Sen. John McCain of Arizona and Rep. Ed Royce, a Republican of California and House Foreign Affairs Committee chairman, Kang expressed support for sanctions on the North and the need to manage its provocations in a “level-headed” manner. She conveyed a similar message to Massachusetts Sen. Ed Markey of the Senate’s Committee on Foreign Relations Monday and also in her meeting with U.S. National Security Council officials including National Security Adviser H.R. McMaster last week.