Jung Jin-hwa trains at Korea National Sport University on Monday with goal of winning a gold medal at the 2020 Tokyo Olympics. [SHIN IN-SEOP

Though it’s been a core Olympic sport since 1912, the modern pentathlon is still unpopular in Korea.

Only 400 pentathletes are registered in Korea, although they are slowly getting to a globally competitive level. In July, for instance, Jung Jin-hwa won the 2017 UIPM Modern Pentathlon Senior World Championship in Cairo with a total of 1,400 points.

“I still can’t forget the day I won,” Jung said. “Since all five events in modern pentathlon have to be played in one day, there are a lot of variables. I couldn’t fall asleep on the night I won the World Championship.”

The modern pentathlon required athletes to compete in fencing, swimming, riding, shooting and running, in that order.

“Our strategy was to earn as many points as possible in fencing,” said An Chang-sik, Jung’s coach. “Once Jin-hwa was ranked first after fencing, he played the rest of the events comfortably.”

Jung started as a triathlete in the eighth grade, and once represented his elementary school as a runner and won an award, but never considered becoming an elite athlete.

“I was fascinated with modern pentathlon once I started learning new sports like swimming and fencing,” Jung said.

Jung trains from 6 a.m. to 10 p.m. every day, working on shooting and running before breakfast and swimming after. After lunch, Jung trains in fencing and riding for four hours, and to conclude the day, after dinner, he works on strength and conditioning.

“Chuseok holiday is about ten days long,” Jung said. “To get higher than where I’m at now, I can’t get lazy with training during the holidays. I think modern pentathlon is similar to life. There were times where I found the sport difficult, but never wanted to give up.” 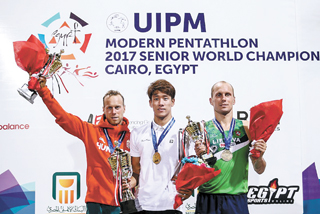 And behind Korea’s success has been the great support of Korea Land and Housing (LH).

“I gained confidence from the World Championship, but I won’t be conceited,” Jung said. “Rather than getting nervous, I’ll play at my best ability to win gold at the Asian Games and the Olympics.”