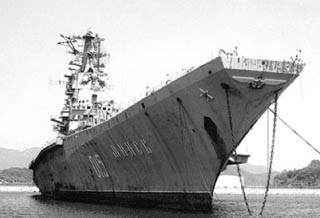 The Korean Peninsula faces a critical moment as frightening nuclear weapons and high-tech strategic bombers are appearing. South Korea’s armaments are secondary, and the awkward situation reminds me of a past incident from 22 years ago, when South Korea briefly had two aircraft carriers that Russia scrapped in 1995.

When the Minsk was sold to Korea for junk, it was seriously rusty and the weapons functions were disabled. But since the structure did not have much damage, it had considerable potential for refurbishment. Around that time, China purchased the Varyag, a scrapped aircraft carrier from Ukraine. About a decade later, it was rebuilt and commissioned as the Liaoning, China’s first aircraft carrier.
Both ships originated from the Soviet Union, but the Liaoning’s story stands in stark contrast with what happened to the Minsk.

After the Soviet Union dissolved in December 1991, it was hard to maintain military strength. In 1994, the Russian Navy decided to decommission its aircraft carriers and sold them to foreign bidders. The Minsk and Novorossiysk were on the market, and they were formidable strategic assets in the Soviet Union’s Pacific fleet. Thirty-three companies from around the world made a bid, and a Korean trading company, Young Distribution, won. The company’s chairman, Cho Duk-young, demonstrated an industrial spirit of willingness and challenge.

The Minsk cost $4.6 million and the Novorossiysk $4.3 million, which was surprisingly affordable. The cost of building a nuclear-powered submarine these days is estimated to be 2.5 trillion won ($2.18 billion). The two aircraft carriers were decommissioned early — the Minsk had only been in service for 15 years and the Novorossiysk 11 years. By comparison, the USS Enterprise was active for 50 years.

The Minsk was a Kiev-class aircraft carrier, gigantic and charming. It was smaller than a U.S. aircraft carrier with displacement of 38,000 tons standard and 45,500 tons loaded. It was 273 meters (298 yards) in length with a 195-meter flight deck, but it had the merits of a cruiser and more attack muscle. During the Soviet era, the aircraft carriers faced the U.S. Navy’s Seventh Fleet.

But the powerful aircraft carriers were sold at a low price because the contract was based on the weight of scrap metal. At the time, Japanese broadcaster NHK produced a provocative report that the main equipment was still onboard and could be converted for military use. The Russian Navy then destroyed key equipment for control, air defense and target detection, and the two carriers left the Pacific Fleet’s port in Sovetskaya Gavan in October 1995 and towed near Pohang’s harbor five days later. But an unexpected trial awaited.

There were protests by environmental groups against the entry of the aircraft carriers. They were concerned about oil leaks and possible radiation in the process of breaking down the vessels. The aircraft carriers were not nuclear-fueled and used diesel, but the rumor that they were nuclear-powered spread fast.

The Novorossiysk was broken down by Posco, and in the process, treasures hidden in the scrap metal were found, including special steel. It could be reverse-engineered as well. The head of the National Intelligence Service at the time, Kwon Young-hae, took charge of the project, and the knowledge extracted helped build the ROKS Dokdo.

The Minsk was denied such a fate. No port was willing to take it, so it went to the naval port in Jinhae. Back then, the Korean Navy was limited to coastal operations while an aircraft carrier was the symbol of an ocean navy. The Navy considered the Minsk cumbersome, but it posed an opportunity. “Breaking up the aircraft carrier is impossible, so it could be redesigned and refurbished,” they thought. Actually, it was possible as Korea had world-class shipbuilding and IT capabilities.

But the caliber was not applied to the Minsk because the government lacked the will. The authorities had little imagination in defense, and the sense of ownership in security was missing. Confrontation with environmental groups was also inevitable. Decisive leadership was needed to get through the opposition.

The international situation was very different at the time. China hadn’t revealed the claws of a lion, and North Korea was enduring its Arduous March. South Korea was able to get cooperation from the United States. But the value of the treasure was left hidden. Korea did not take it. Adm. Yoon Jong-gu, who had been dispatched to Russia as a military officer, said it was the most regrettable moment in Korea’s defense history.

The aircraft carrier that China had purchased was incomplete. It was 70 percent built, and China purchased it for $20 million to use it as a casino on water. But the condition was meaningless because the determination of the government is what’s more important. The Liaoning is now a symbol of China’s naval power.

Song Young-moo, South Korea’s minister of defense, has the ambition of owning a nuclear-powered submarine. While in the field, he was a captain on the warship Cheongju. What does the Minsk mean in his memory? Its tragic fate reflects the lack of will in South Korea’s past. It is a living lesson.