Consumer prices shoot up before Chuseok

Consumer prices shoot up before Chuseok

Gift sets of processed food including tuna, cooking oil and spam are displayed before the Chuseok holiday at a major retailer in Seoul on Thursday. The price of fruit and meat has shot up before the holiday. [YONHAP]

Korea’s consumer prices continue to rise, passing 2 percent for three consecutive months as food prices increase before the Chuseok holidays, when many families will perform ancestral ceremonies that require a variety of dishes.

The consumer price index for the month of September stood at 103.59, up 2.1 percent compared to a year ago, according to data from Statistics Korea on Thursday.

“Consumer prices have been on the rise for three months straight since July,” said Moon Jeong-hee, an economist at KB Securities. “The rise in consumer prices for the third quarter this year posted 2.3 percent, the biggest [quarterly] increase in five years since the second quarter of 2012.”

This is also the first time since June 2012 that consumer prices have risen by more than two percent for three consecutive months. 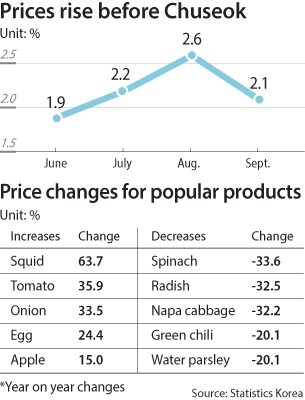 In particular, food products have seen the most dramatic price hike, largely due to rising demand before the holidays.

The consumer price index for fresh fruits in September stood at 119.64, a 21.5 percent hike compared to a year before when the figure was 98.44.

In detail, the price of squid skyrocketed by 63.7 percent compared to a year earlier. The price of eggs also rose 24.4 percent year on year after a pesticide scare swept the nation last month.

Moon explained that the rise in the overall consumer price index was largely led by the prices of food, agricultural products and oil.

“The rise in the price of agricultural products prior to Chuseok was one of the main drivers behind the increase in overall consumer prices,” explained Moon.

“The fluctuation in prices of agricultural and livestock products is temporary and will stabilize,” said Moon. “The increase in consumer prices will slow down in the fourth quarter.”