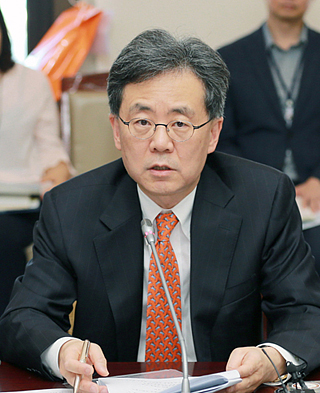 President Donald Trump earlier this month was one step away from terminating the United States’ free trade agreement with Korea, going as far as writing a letter backing out of the pact, Korea’s trade minister said in Washington on Wednesday.

Kim Hyun-chong, who is in the capital to meet with the U.S. trade representative, said his delegation had been given the opportunity to meet with high-ranking White House officials, who confirmed that Trump was close to announcing a pullout from the free trade agreement.

In another meeting with six U.S. senators, one lawmaker told Kim that Trump had finished writing the letter terminating the pact, but the lawmaker had also spoken with Trump while the president was visiting his electoral district during Labor Day to express his opposition to ending the FTA.

While most members of the political and business circles support continuation of the free trade agreement, Kim warned that the possibility of termination remains real.

“It seems the United States will continue using the threat of termination as leverage,” the minister said.

A few days after the Washington Post reported that Trump told his advisers to prepare withdrawing from the trade pact on Sept. 2, Trump, who was traveling in Houston after Hurricane Harvey, told reporters that the FTA was “very much on my mind”

But with tensions rising over North Korea’s nuclear and missile provocations, the free trade issue is not likely to be raised by the president anytime soon.

A week after Trump’s comments in Houston, the White House reportedly told members of Congress that they had put the issue on the back burner after many lawmakers, including some from his own party, as well as business leaders expressed strong opposition to ending the pact, citing its impact on cooperation between the two countries on other issues like national security.

But even if Trump is not bluffing, Kim said his team is fully prepared in case he decides to pull out.

“We will counter firmly and calmly with all possibilities opened so that our own national interests are put first even under the pressure and demands of revision or termination,” Kim said.

The trade minister noted that the United States is likely to make strong demands on automobiles and auto parts, though he added that Korea, too, could press the United States in negotiations. “However, I will not disclose further details for strategic purposes,” he said.

The trade minister has been reaching out to those who might be supportive of sustaining free trade between the two countries, including U.S. Trade Representative Robert Lighthizer as well as key members of the Trump administration. While in Washington, he has met with 20 lawmakers and think tank researchers as well as members of influential organizations and businessmen who have all shown strong support,” he said.

“The congressmen we met were clear on their opposition to terminating the FTA,” Kim said. “And they also showed intention in actively participating in related discussions.”

Kim said he has been persuading high-ranking officials on the importance of seeing who will win and lose from canceling the FTA. “We have been asking to consider carefully if the message that the United States is sending is sound if it breaks away from the FTA with Korea when it has already gotten out of the Trans-Pacific Partnership,” Kim said, “which would mean it would be moving away from a pivot to Asia strategy.”

Kim will be meeting President Trump’s son-in-law and White House adviser Jared Kushner and Henry Kissinger on Thursday in Washington.