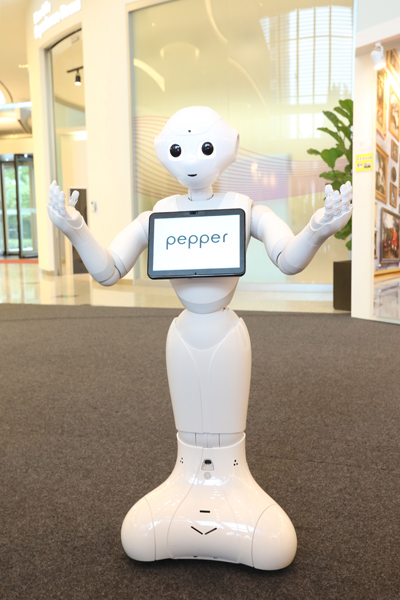 A humanoid robot able to comprehend a person’s emotion will be put into service at some stores and banks in Korea in October.

LG U+ announced Thursday that it is bringing the Pepper robot developed by SoftBank Robotics to operate in some partner companies. Pepper uses an artificial intelligence system developed by LG U+.

“Unlike other operators [mobile carriers] we decided to introduce our artificial intelligence platform through a robot,” said an official from LG U+.

“Currently, we are providing the service at businesses where Pepper can have a specific purpose and serve a specific revenue model. But since we have partnered with companies in diverse industries, I believe its usage will increase in the coming future,” the official added.

LG U+ has partnered with five domestic businesses - Woori Bank, Kyobo Book, Gachon University Gil Medical Center, Lotte Department Store and Emart - to deploy Pepper for the next one year. A Pepper will also be put to work at the LG U+ flagship store in Bundang.

The mobile carrier said the robot will be able to have simple conversation with the customers including recommending services available on site.

While the robots deployed at the LG U+ store, Woori Bank, Kyobo Book and Gachon University Gil Medical Center will have the same capabilities, the Peppers at Emart and Lotte Department Store will provide customized services to customers.

At the Lotte Department Store in Myeong-dong in central Seoul, Pepper will greet customers on the basement floor. It is able to take selfies with customers and tell them to get closer and not be shy.

It can recommend restaurants and boutiques the customers will like based on an analysis of their age and gender. Pepper is able to speak four languages: Korean, English, Japanese and Chinese.

The retail giant aims to upgrade Pepper to have natural conversation with customers in the coming years. Lotte predicted such conversations will be available by the year of 2018.

“Last April, we installed a concierge robot Elbot for the first time in the industry,” said an official from Lotte Department Store.

“The latest robot is able to move and it feels more similar to humans. We are going to add more fun elements to shopping in the future,” the official added.