Patriot missile launchers and honor guards from the Army, Navy and Air Force stand for military parade to mark the 69th Armed Forces Day on the compound of the Second Fleet Command in Pyeongtaek, Gyeonggi, on Thursday. For the first time, the Armed Forces Day parade was held in a Navy command compound. [YONHAP]

A South Korean military with its own wartime operational control will be more fearsome to the North, President Moon Jae-in said Thursday, repeating his commitment to bolster the country’s independent defense capabilities and assume command authority from the United States.

“Our immediate goal is clear,” Moon said in a speech at a ceremony to mark the Armed Forces Day. “We have to stop North Korea’s provocations and persuade it to abandon its nuclear program.”

He vowed to strengthen the Korea-U.S. alliance while beefing up domestic military capabilities in order for the country to command its own troops in the event of a conflict.

“My administration is pursuing the early takeover of wartime operational control,” he said. “The handover on the basis of our independent defense capabilities will ultimately lead to a remarkable advancement in the fundamentals and abilities of our military. When the South has wartime operation control, the North will fear us more, and the people will trust our armed forces more. With elevated self-esteem, our military will become stronger, and the Republic of Korea will emerge as a security hub in Northeast Asia. I am convinced that our military is equipped with such capabilities. The people and I have confidence in our armed forces.” 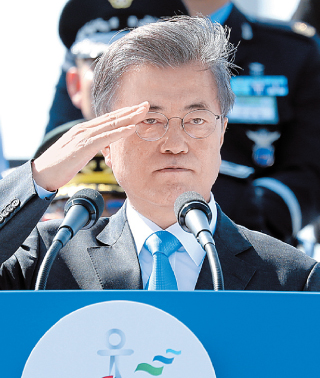 Recovery of wartime operational control of the Korean forces from the United States was a presidential pledge of Moon. During the Roh Moo-hyun administration, Seoul and Washington agreed that the transfer would take place in 2012, but the plan was delayed by the succeeding conservative presidents. Moon said he will complete it during his presidency, which ends in May 2022.

Technically, wartime operational control is supposed to stay in U.S. hands until Korea is considered ready to command the troops.

During a summit in June, Moon and U.S. President Donald Trump agreed to “continue the alliance’s work to expeditiously enable the conditions-based transfer of wartime operational control.” They also agreed that Korea will continue to acquire the critical military capabilities necessary to lead the combined defense, and detect, disrupt, destroy, and defend against the North’s nuclear and missile threats.

“The top priority is to secure abilities to counter the North Korean nuclear and missile threats,” Moon said in his speech. “We have to further strengthen our Kill Chain pre-emptive defense system and the Korea Air and Missile Defense. It is also necessary to significantly develop the Korea Massive Punishment and Retaliation, which is designed for thorough retribution. As these three powerful Korean systems are the core of our military’s independent capabilities, I hope best efforts will be made for their early completion.”

Moon also said the Korea-U.S. combined defense capabilities must be strengthened with procurement efforts. “It will be possible to fundamentally curb the North’s nuclear provocations when the Korea-U.S. extended deterrence is actually exercised. I urge you to give your best efforts to make it possible for our armed forces to play a leading role in establishing a stronger and a more stable combined defense system.”

The ceremony, held in advance of the 69th Armed Forces Day on Sunday, took place at the Korean Navy Second Fleet headquarters in Pyeongtaek, Gyeonggi. It was the first time that the Navy command hosted the event.

“The president handpicked the venue because it was a symbolic place for the Cheonan’s sinking and Yeonpyeong sea skirmish,” said a senior Blue House official, referring to two deadly naval incidents involving North Korea. In his speech, Moon also noted that the second fleet command “is fraught with the souls of our men in uniform who fought to their deaths to safeguard the Northern Limit Line in the Yellow Sea.” 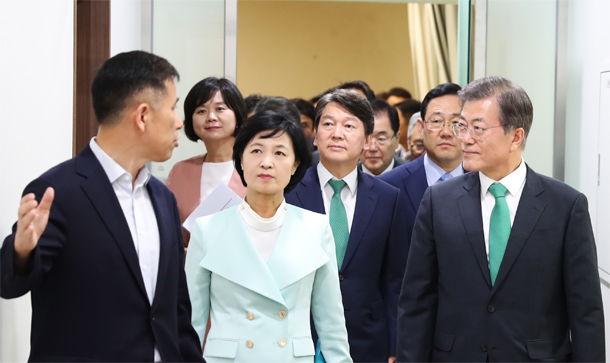 At the ceremony, the Ministry of National Defense displayed strategic capabilities of the three Korean systems - the Kill Chain pre-emptive strike system, Korea Air and Missile Defense and Korea Massive Punishment and Retaliation - to send a strong message to North Korea. Moon inspected the troops and weapons during the ceremony.

Hyunmoo-2C ballistic missiles with 800-kilometer (497-mile) range made their public debut. The military conducted a successful test-firing of the missile in June and Moon attended the event. The Hyunmoo missiles are the key capabilities of the Kill Chain and Korea Massive Punishment and Retaliation systems.

Other strategic weapons including Army Tactical Missile System (ATACMS), Patriot-2 missiles and Taurus air-to-ground missiles were also displayed in a clear demonstration of might to the North.

The Ministry of National Defense and the Blue House also said Thursday that Seoul and Washington are discussing a plan to increase rotational deployments of U.S. strategic assets to Korea and nearby areas. Officials, however, said the deployment schedule is yet to be fixed.

The ruling and opposition parties said Thursday that the Blue House told them that the deployments will begin as early as at the end of this year. They said Chung Eui-yong, head of the National Security Office, briefed them about the plan when party leaders had a meeting with Moon at the Blue House on Wednesday.

Moon invited political leaders for a dinner and discussion on national security issues. According to spokesmen of the ruling Democratic Party and opposition People’s Party, Chung told them that the United States has promised to expand rotational deployments of strategic assets near the peninsula. “It will begin as early as at the end of this year,” Chung was quoted as saying.

“The two countries are having close consultations and the deployment will begin based on it,” said a senior presidential official. “It doesn’t mean that the timing is fixed to the year’s end. It can be earlier or later than the year’s end. Right now, the two sides are having talks about the schedule and direction.”

According to the political parties, Chung also told the political leaders that North Korea may stage additional provocations around Oct. 10 or 18. Oct. 10 is one of the most important political anniversaries of the North - the anniversary of the Workers’ Party foundation. The National Congress of the Chinese Communist Party is scheduled to take place on Oct. 18.