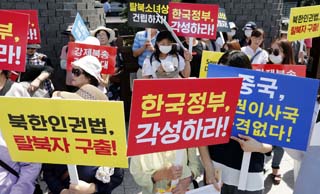 There is a symbolic photo of the late President Roh Moo-hyun, in which Roh is smiling while hugging a soldier during his visit to the Zaytun unit, a contingent of Korean troops dispatched to Iraq, in December 2004. Similarly, there is an image of President Moon Jae-in hugging the surviving family of a victim during the May 18 Gwangju Democratization Movement anniversary ceremony earlier this year.

The Moon administration was launched with the candlelight revolution of ordinary people. Despite the North Korean nuclear crisis, he stressed the will to open an era of dialogue and cooperation through various policies, including the Berlin statement in July.

But his ambition has been blocked by the North Korean leader Kim Jong-un’s reckless brinkmanship. But we must not be disappointed. We must force the North to sit down at a negotiation table as soon as possible through cooperation with the international community. When the people are united with the leader, peace on the Korean Peninsula will be achieved.

We are living in an era when 30,000 North Korean defectors are in the South. Their presence is an important asset for unification, but it also accompanies risks.

How can we win over 25 million North Koreans if we can’t make 30,000 defectors happy?

Skepticism is high about the policy toward defectors, while Korea’s role in the international efforts to resolve the nuclear crisis faces criticism. It is undeniable that our role has limits. Therefore, we must work to find policy alternatives that only we can create and push forward. One can be an attempt to quietly send the “wind of truth” to the North. There are many ways to supply videos, broadcasts and internet content.

But the most effective way is an engagement policy toward defectors. Defectors will truly feel happy in the South and the sentiment can be directly and indirectly shared with the North Korean people. Over 70 percent of defectors are sending money to the North and contacting their relatives. Therefore, the voice of 30,000 defectors can send an important message to their families and relatives in the North, which will spread among the millions of North Korean residents. It has the power to change the North.

For this reason, we must improve the way we treat defectors. To this end, defectors should be offered not only financial support but also be treated equally.

First, Moon should invite or visit defectors for Chuseok or Lunar New Year holidays and encourage them. He can visit Hanawon or the home of a defector. He can invite young, elite defectors to the Blue House to listen to their ambitions.

Some may oppose this because it may provoke the North. But such thinking is obsolete and passive. We must be more aggressive and confident. Defectors are citizens of South Korea. We must do what’s necessary, even if there are certain obstacles.

Second, we must improve the system that will allow defectors to work major posts in our society with confidence. Organs that are related to North Korea, such as the Committee for the Five Northern Korean Provinces and the National Unification Advisory Council, should be open to defectors.

If individuals and organizations are discriminating against defectors, there will be a long way to unification.

Third, defectors are destined to be weak. Projects of healthy civic groups must be improved to provide support for their smooth settlements in our society to start competition. They have survived life-or-death situations to come to the South, and they must not be disappointed. A radical shift of perception is necessary. There should be more examples of defectors who manage succeed in the South and maintain lives better than that of the middle class.

The war of words between Kim and U.S. President Donald Trump has passed a limit. But we must not be afraid. We can counter it with unity in the South and strong cooperation with the international community.

The crisis is serious, but it does not give us an excuse to abandon the tasks we can start now. Paying special attention and offering generous treatments to defectors may be small, but an effective project. Since he took office, the president has engaged society’s weak. Expectations are high that they will reach out to defectors.

*The author is the president of the One Korea Center.