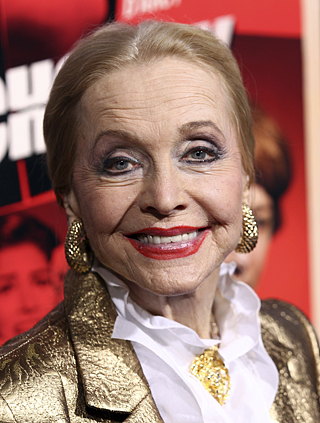 Actress Anne Jeffreys at the premiere of “Hitchcock” in November 2012 in Beverly Hills. Jeffreys, an actress and opera singer who starred as Marion Kerby in the 1950s TV series “Topper,” died Wednesday at age 94. [AP/YONHAP]

NEW YORK - Anne Jeffreys, the actress and opera singer who likely had her greatest impact on TV audiences as Marion Kerby “the ghostess with the mostess” in the 1950s TV series “Topper,” has died. She was 94.

More recently, she spent two decades playing Amanda Barrington on “General Hospital.” She was featured in the role of the wealthy on more than 350 episodes of the soap opera from 1984 until 2004.

In “Topper,” she and Sterling starred as fun-loving husband and wife George and Marion Kerby who, after dying in a Swiss avalanche, return as ghosts to their mansion and comically haunt its new occupant, actor Leo G. Carroll as staid banker Cosmo Topper.

Each week they were introduced to viewers as George, “that most sporting spirit,” and Marion, “the ghostess with the mostess.”

They were among many varied roles in a long career in films, television, opera and on Broadway for Jeffreys, who continued to work well into her 70s. Her final on-screen appearance was on the HBO series “Getting On.”

Early in her career, she appeared opposite John Wayne in “Flying Tigers.” In later years, she appeared on such TV shows as “L.A. Law” and “Murder, She Wrote” and played David Hasselhoff’s mother on “Baywatch.”

The blonde beauty with the lilting soprano voice began her performing career in 1940 with the New York City Opera, the Ford Symphony and the Los Angeles Opera Company, singing Mimi in “La Boheme” and Cho Cho San in “Madame Butterfly.”

She had made her film debut at MGM in 1942 in “I Married an Angel,” which marked the final costarring of Jeanette MacDonald and Nelson Eddy.

During a contract with Republic, she appeared with Wayne in “Flying Tigers” and made B westerns. Hughes signed her to a contract at RKO and cast her in “Step Lively,” which starred Frank Sinatra.

During her RKO days, Jeffreys appeared in 15 movies, mostly B films. She made two films in the 1940s as Tess Trueheart, girlfriend of sleuth Dick Tracy.

Seeing no future in Hollywood, Jeffreys returned to New York to appear in a musical version of “Street Scene.” She continued in opera, light opera and musicals and played the lead in the touring company of “Kiss Me Kate.” Later, she replaced Patricia Morison, the original Kate, in the Broadway production.

It was during the show’s New York run that she met the dashingly handsome Sterling, who was also starring in a New York show. Their romance was interrupted when he returned to Hollywood for such films as “The Sundowners” and “Show Boat.” They married in 1951.

In addition to “Topper,” Sterling and Jeffreys appeared in their own nightclub act and starred together in another TV series, “Love That Jill” which lasted for half a season in 1958.

An early marriage ended in divorce, but the union with Sterling endured until his death. They had three sons, Jeffreys, Dana and Tyler.