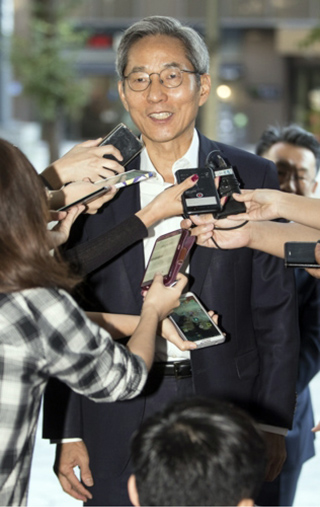 Chairman Yoon Jong-kyoo of the KB Financial Group on Friday vowed to focus on digitalized services to meet growing demand, calling the current industry landscape “an age of unlimited competition.”

“In an age of unlimited competition by platform players, we must put more efforts into creating ‘killer content’ for non-face-to-face channels,” Yoon told employees in a speech commemorating the 9th anniversary of the KB Financial Group at the headquarters of KB Kookmin Bank in Yeouido, western Seoul.

Yoon was referring to a surge of interest in internet-only banking, most notably that by Kakao Bank, which attracted nearly 1 million subscribers within five days of its launch on July 27 and now has more than 3 million customers.

Yoon said that after his company offered powerful digitalized platforms, it could best utilize its traditional face-to-face platforms in retail finance, which KB Financial Group excels in.

The popularity of Kakao Bank has worried traditional commercial banks, which are scrambling to come up with their own digitalized platforms to attract customers.

The 62-year-old CEO, who began his career at the Korea Exchange Bank in 1973, called on KB employees to break down a cycle of habitual routine at work and concentrate on evolving customer needs.

He cited the examples of IT giants Google and Facebook.

“Google and Facebook have a policy called ‘Bug Bounty’ in which they reward white hackers who find and report breaches of their IT security systems,” Yoon said. “ This is a good example of working with people outside the group with an open-minded attitude.”

Yoon’s tenure, which started in 2014, ends in November. He came to rescue the company when an internal feud tarnished its reputation and cost two top executives their jobs. Given the recent performance of its subsidiaries, some speculate it shouldn’t be a problem for Yoon to extend his time at KB.

Yoon is the sole candidate for the top KB position. His bid will be voted at a shareholders’ meeting on Nov. 20. If approved, he will begin a second three-year-term.