China cracks down on North’s companies

China cracks down on North’s companies 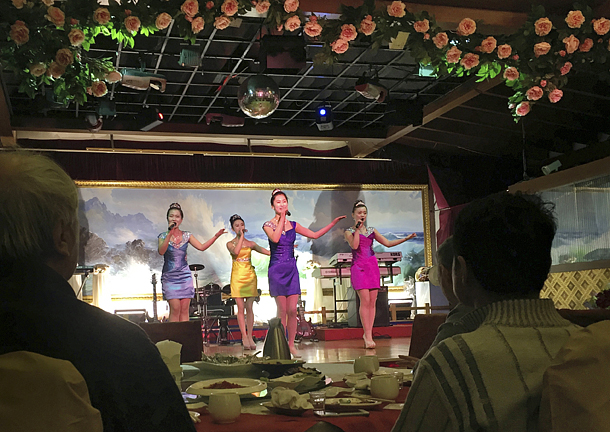 In this Feb. 18, 2016, photo, North Korean performers entertain customers at the Okryugwan Restaurant in Beijing. Chinese news reports Thursday said the Chinese government has ordered most North Korean-owned businesses and joint ventures with Chinese partners to close under UN sanctions imposed over the North’s nuclear and missile programs. [AP/YONHAP]

The decision is in keeping with sanctions unanimously adopted by the UN Security Council in New York on Sept. 11, which aim to cut off revenue for North Korea’s nuclear and missile program in response to the regime’s sixth nuclear test on Sept. 3.

North Korea-owned businesses will have to shut down by Jan. 9, according to the Commerce Ministry.

This could target over 100 North Korean restaurants operating in China, many of which are run as joint ventures. The latest Security Council sanctions also prohibit work authorization for North Korean overseas laborers.

However, companies that are approved by a UN Security Council sanctions committee, including nonprofit and non-commercial utility and infrastructure projects, are exempted.

After the adoption of UNSC Resolution 2375 earlier this month, which capped oil supplies to North Korea among other restrictions, China’s Commerce Ministry announced on Sept. 23 it would limit exports of refined petroleum products to the country from Oct. 1. It also said it would ban exports of condensates and liquefied natural gas (LNG) to North Korea and bar imports of textiles from the country.

Heather Nauert, spokesperson for the U.S. Department of State, said in a briefing Thursday, “Secretary Tillerson’s visit to China reaffirms the administration’s commitment to further broaden and enhance U.S. economic and security interests in the Asia-Pacific region.”

Tillerson’s visit precedes U.S. President Donald Trump’s first visit to China in November. She continued, “China has taken some great strides in recent weeks, and we look forward to China adhering to the UN Security Council resolutions and fully implementing all those resolutions.”

Nauert said, “We’ve seen some reports today about how they have committed to do just that,” indirectly referring to the Chinese Commerce Ministry announcement. “So I think the secretary will be thanking them for the steps that they’ve taken in that direction.”

Thornton added, “We are working closely with China to execute this strategy and are clear-eyed in viewing the progress - growing, if uneven - that China has made on this front.”

Noting Tillerson’s description of China’s support for the pressure campaign as “notable, but uneven,” she pointed out that Washington has “recently seen Chinese authorities take additional actions” and that a shifting of Chinese policy has been spotted.

She said the United States will “work with China and Russia on the threat posed by North Korea” and on how to further pressure the regime.

“We have also made clear that if China, Russia and others do not act, we will use the tools we have at our disposal,” Thornton added. “While our actions are not meant to target countries other than North Korea, we have consistently told our foreign counterparts that we will continue to act multilaterally and unilaterally to disrupt North Korea’s illicit activities wherever they are located.”

Her remarks indicated that Washington is ready for secondary sanctions that target third-country entities or individuals with links to North Korea’s illegal activities by cutting them off from the U.S. market and financial systems.

On Tuesday, the U.S. Department of the Treasury announced new unilateral measures sanctioning eight North Korean banks and 26 North Korean nationals who act as representatives for the country’s banks in China, Russia, Libya and the United Arab Emirates. This followed an executive order signed by Trump on Sept. 21 authorizing the Treasury Department to suspend U.S. correspondent account access to any foreign bank that engages in significant transactions with North Korea.

South Korean Minister of Foreign Affairs Kang Kyung-wha said in an interview with JTBC Newsroom Thursday evening, following her return from a trip to New York and Washington, there is a “very high likelihood” of another provocation by North Korea.

“If North Korea continues its provocations, pressure and sanctions will only continue to increase,” she said. “According to some analysis, this [latest UNSC] resolution can cut up to 90 percent of the cash flow into North Korea. If that is the case, there will be considerable pressure overall. And of course the key here is China and Russia, bordering North Korea.”

Kang pointed out that China, responsible for 90 percent of trade with North Korea, has been showing its will to implement the UN Security Council resolutions faithfully.

“When I met with Foreign Minister Wang Yi, he repeated the point that China will not target just the official, public and legitimate trade, but smuggling as well,” said Kang. “And China is showing this through substantial actions as well. That is why I believe that compared to the past, there will be more speed in terms of implementation of sanctions and seeing their effect.”

In response to the Chinese Commerce Ministry’s order for North Korean companies to shut down within 120 days, Kang said, “I believe this is a part of China’s contribution to the international community’s faithful implementation of Security Council resolutions.”

However, Lu Kang, spokesman of the Chinese Foreign Ministry, pointed out in a briefing Thursday, “Sanctions and promoting peace talks are both the requirements” to resolving the North Korea issue.

He continued, “Overemphasizing one and overlooking the other is not consistent with the spirit of relevant UN Security Council resolutions.”