New tradition for Chuseok holiday is getting plastic surgery

New tradition for Chuseok holiday is getting plastic surgery 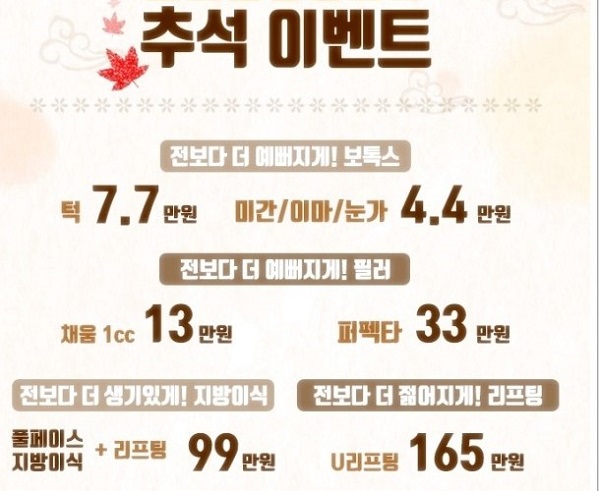 Korea’s plastic surgery clinics are working through Chuseok and advertising the holiday — which is longer than usual — as the perfect time to have some work done without coworkers or friends finding out.
“If you want to become prettier, there’s never been a better time than during the Chuseok holiday,” Grand Plastic Surgery, a clinic based in Gangnam District, southern Seoul, said in an advertisement on its website. “Get it done without people finding out!”

VIP Plastic Surgery, another clinic in Gangnam, is working every day through the holiday, which for some people is as long as 10 days, though it said it is only accepting patients who need “post-operative care” from Oct. 3 to 9.

“I have made a reservation for my mother at a plastic surgery clinic because if she gets the work done earlier enough, she will have recovered by the time she meets relatives on Wednesday, the day of Chuseok,” said a 53-year-old resident of Gangnam surnamed Kim.

“My mom is in her 70s and she complained about her sagging eyelids. So this is my Chuseok gift for her.”

Some people are just taking advantage of the fact the clinics are open.
“I can’t take off work on normal days to get plastic surgery, so I’m getting my eyes done over the Chuseok holiday,” said an office worker in her 20s surnamed Lee.

“People are making twice as many appointments at our clinic during the holiday than in any time of the year,” said a counselor at a plastic surgery clinic in Seoul.

In 2015, Korea had a total of 1,301 plastic surgery clinics. Seoul accounted for 671 of them, and Gangnam 462, according to National Tax Service data.

The International Society of Aesthetic Plastic Surgery said that the two countries with the highest number of surgical cosmetic procedures in 2015 were the United States (1.4 million) and Brazil (1.2 million). It said Korea was included in a list of countries that followed the top two, including India, Mexico, Germany, Colombia, France and Italy.

“Much of the reservations over Chuseok were made by working people,” said Park Byung-ho, a plastic surgery specialist at Wonjin Beauty Medical Group in Seocho District. “They made reservations one to two months before the holiday.”

Wonjin Beauty Medical Group is also open through the holiday, except on Wednesday and Thursday. It is advertising the Chuseok holiday as “the best opportunity to receive a plastic surgery” on its website. Some clinics have been completely booked for the holiday since a few weeks ago.

“I was looking to get plastic surgery on my ear during Chuseok,” said a 24-year-old woman surnamed Kim. “I tried to find an open spot some three weeks ago, but all the clinics were booked through the holiday season.”

Some doctors are working around the clock due to spiking reservations during the holiday.
“I ate gimbap [seaweed rice roll] at 10:30 a.m. yesterday, and then I was in the surgery room until midnight,” a doctor surnamed Choi from a plastic surgery clinic in Gangnam told the JoongAng Ilbo on Friday. “Usually we operate until 7 p.m. but these days, I don’t have a moment to rest because of the back-to-back reservations. I will probably be operating until 3 a.m. tomorrow.”

Advertisements on websites of plastic surgery clinics repeatedly used phrases such as, “Use the Chuseok holiday and pay for your parents’ surgery as a holiday gift,” or “Change into a completely different you during the holiday.”

But some associations are cautioning patients not to be pushed into something they may regret.

“Some plastic surgeries do have side effects, so think twice before you decide to get one,” said Park Young-jin, an executive member of the Korean Association of Plastic Surgeons. “Take time to research and find out the expertise and licenses of the doctors and do not believe all the advertisements.”