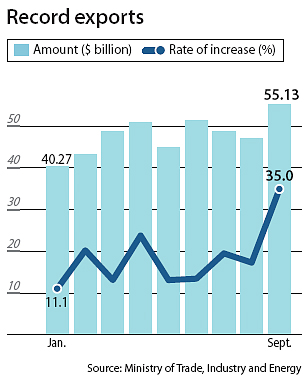 Korea’s exports hit a record high in September thanks to strong global demand for semiconductors and steel.

Exports in September tallied $55.13 billion, up by 35 percent year on year, according to data from the Ministry of Trade, Industry and Energy. Korea’s exports have been on a steady rise since last November, making September the 11th consecutive month that outbound shipments rose.

During September 2016, Korea’s exports fell by 6 percent year on year.

Before September, the record for monthly exports from Korea was in October 2014, when the figure stood at $51.63 billion.

“The daily amount of export also reached an all-time high [of $2.35 billion],” said the trade ministry in a report released on Sunday. “Exports of semiconductors and steel reached fresh highs [to lead the growth].”

Exports of Korean chips skyrocketed by 70 percent in September compared to a year before to reach $9.69 billion. The release of new phones this year as well as the steady rise of the price of DRAM memory chips played major roles, according to the trade ministry.

Shipment of steel products more than doubled to reach $4.67 billion, up 107.2 percent from a year ago. Steel prices climbed globally while major infrastructure projects overseas raised demand for Korean steel, the ministry said.

Shipments to Vietnam came to $4.74 billion, another record high and nearly 70 percent higher than a year earlier, pushed up by the demand for chips and displays by factories there.

The trade ministry forecast that global trade conditions will remain strong with major economies - the United States, China and European Union - showing healthy demand. However, uncertainties such as rising trade protectionism and the U.S. Fed’s recent decision to reduce its balance sheet starting this month may slow down Korean exports in the fourth quarter, the ministry added.

Despite the record-breaking numbers, some analysts said October must be considered when looking at the momentum of Korean exports as a whole.

“The Chuseok holiday was in September last year while it is in October this year,” said Kim Doo-un, an economist at Hana Financial Investment in a recent report. “We have to combine the figures from October and September to examine the pace of the recovery of Korean exports.”

“We will monitor the conditions closely as various factors such as the reduced number of working days and worsened global trade conditions can slow down the growth of Korean exports in the fourth quarter,” said Paik Un-gyu, the trade minister.